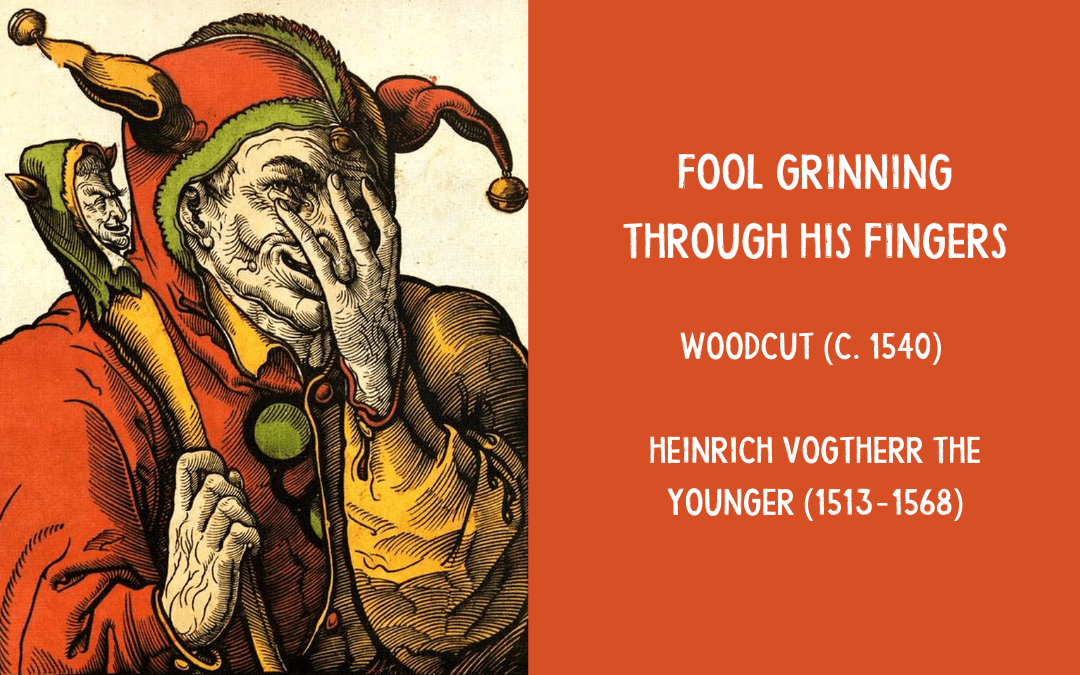 The latest in our series of fools peeping through their fingers, this one is a woodcut by Heinrich Vogtherr the Younger (1513-68), dated to around 1540 and so slightly later than the preceding paintings on the same theme.   He has the cap and bells complete with ass ears and coxcomb.

This fool wields his marotte almost like a weapon and has a pair of spectacles tucked into his jacket front; the glasses, which occur in several of our series, seem to suggest an incapacity to ‘see’ the truth – perhaps the fact that the fool has glasses, which should aid sight, but doesn’t actually put them on, hints at this unwillingness to see things as they really are, reinforcing the turning of a blind eye inherent in the peeking-through-fingers sly look.

Our woodcut Moe stands out from the first Five Guys Named Moe in our series for having an inscription: 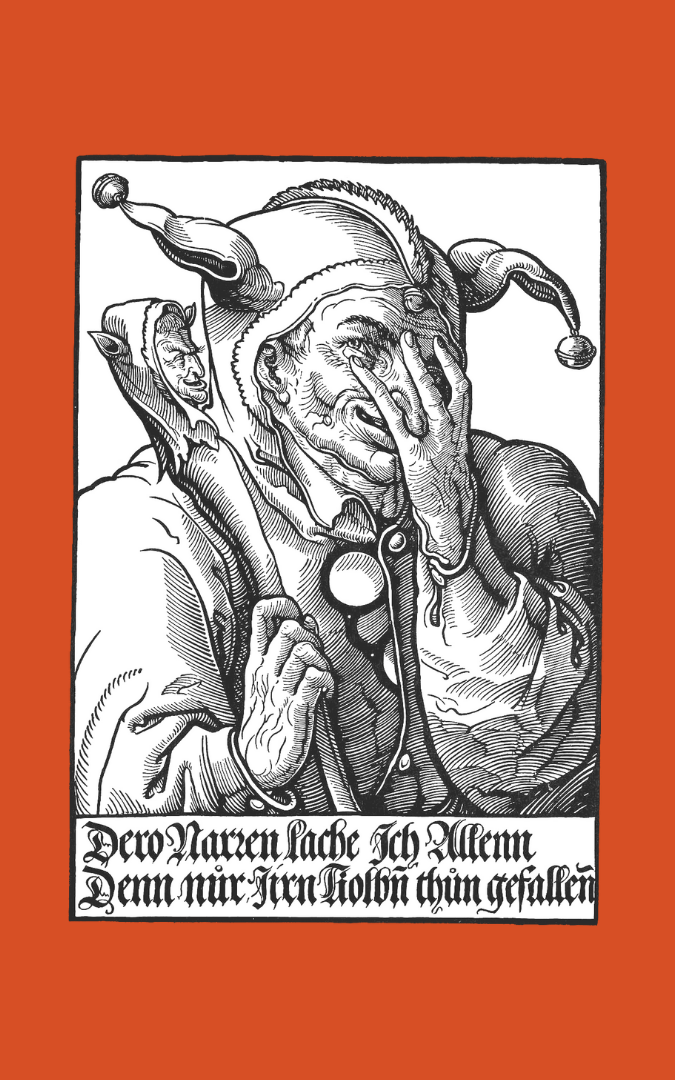 I laugh at all you fools / Who only take pleasure in your fool-stick.)

This seems to be a double-entendre mocking those who make too much of their ‘stick’, and yet the fool is also indulging them; the peeking through fingers reflects a widely used medieval proverb meaning to turn a blind eye or look the other way, tolerating or conniving at immoral behaviour.  Kenneth Craig suggests that the fool’s out-sized nose itself is ‘suggestive’, echoing the stick aligned with it.

In this as in similar paintings, he holds a pair of spectacles half tucked into his jacket. Cavalli-Björkman mentions a German proverb, ‘To buy someone some glasses’ (‘Jemanden eine Brille kaufen’), which means to deceive or fool somebody.  One commentary moots the possibility that the association with deception could be due to the fact that ‘making glasses at the time was a technical challenge, causing their quality to vary greatly – for this reason, their makers were sometimes considered charlatans.’

Craig suggests ‘We would not be far wrong to suspect by their presence another comment on the lack of perspicacity in our Fools.  Indeed, a parallel tradition in the sixteenth century views spectacles as an ironic attribute of those who cannot or will not see the truth.’

European attitudes to fools were complex and could embrace both the notion of the fool as the truth-teller (including being foolish enough to tell the truth even at cost to himself) – more the court jester end of the spectrum – and the notion of the fool as one who is unwilling or unable to see the truth.  Similarly, in the relationship between fools and religion, we have holy fools and those seen as ‘naturals’ or ‘innocents’ in some sense perhaps being closer to God, and on the other hand, the idea of the sinner as being a fool for turning away from God.

Featured here are the original black and white version together with coloured versions which have appeared on the way.  Red and yellow were common colours for fool costumes, often with dashes of green, as seen here.  It appears that in the Middle Ages yellow could have negative associations since it was believed that saffron could have a bad effect on the nervous system, provoking laughter and even folly.

Craig, Kenneth, ‘Proverb’s Progress: a Fool Looking Through His Fingers’, in The Great Emporium, The Low countries as a Cultural Crossroad in the Renaissance and the Eighteenth Century(Amsterdam 1992), p. 106 and fig. 3

Mellinkoff, Ruth, Outcasts: Signs of Otherness in Northern European Art of the Late Middle Ages, 2 vols (Berkeley: University of California Press, 1993) – this magnum opus touches on many elements in this and related images, rather than making specific references to them.