Wilt thou be my fool? 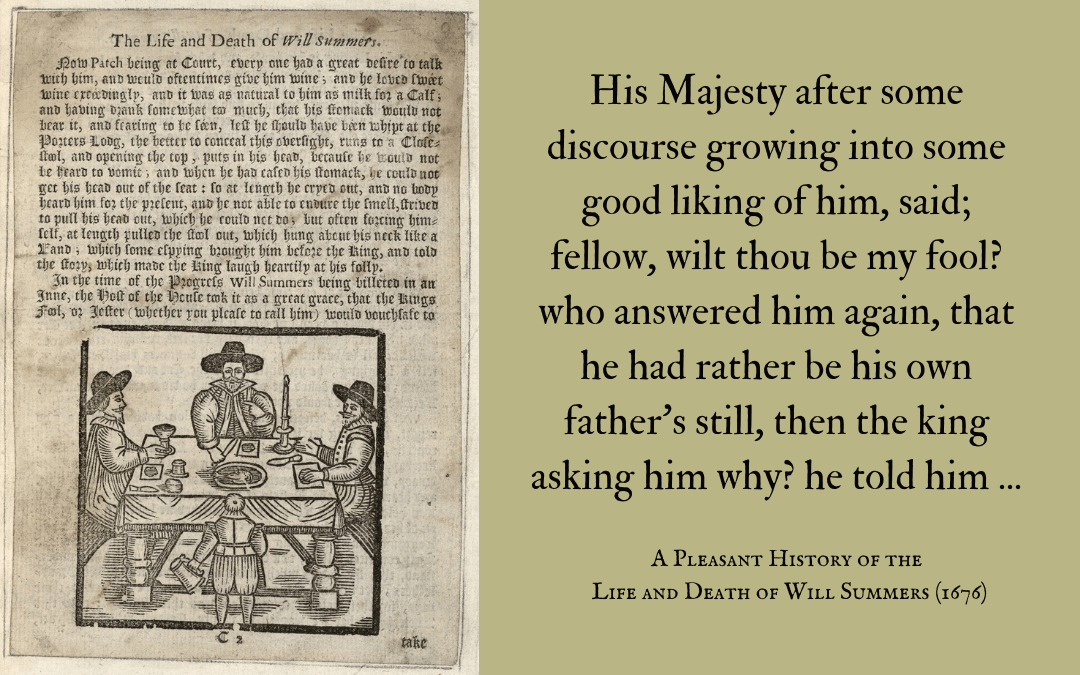 An anecdotal (or perhaps just fictive) account of how an historical jester was ‘interviewed’ by the king.  Will Somers was indeed fool to Henry VIII (r. 1509-47) and appears in a family portrait of Henry.  In this exchange he doesn’t hesitate to poke fun at Henry’s collection of wives.

As with other verifiable jesters, what may have begun as real anecdotes about Somers probably morphed over time into a corpus of jokes and anecdotes, which may have some nugget of truth wrapped in the embellishments of retelling.  This account of how Somers playfully won over Henry rings true but should not be taken as necessarily being so; it appears in a book published some 150 years later.  There were also plays about Somers.

That said, in general, the recruitment of fools appears to have been informal and meritocratic, with a kind of ad hoc ‘talent spotting’ by kings and those who served them. There is a letter from 1535/6 regarding a potential candidate as Henry’s fool, spotted by a courtier on his travels, addressed to Thomas Cromwell.  See as another example of this approach, an account of how the German jester Claus Narr was recruited.

His Majesty after some discourse growing into some good liking of him, said; fellow, wilt thou be my fool? who answered him again, that he had rather be his own father’s still, then the king asking him why? he told him again, that his father had got him a fool for himself, (having but one wife) and no body could justly claim him from him: now you have had so many wives, and still living in hope to have more, why, of some one of them, cannot you get a fool as he did? and so you shall be sure to have a fool of your own.

Source: A Pleasant History of the Life and Death of Will Summers: How He Came First To Be Known at Court, and By What Means He Got to Be King Henry the Eighth’s Jester, with the entertainment that his cousin Patch, Cardinal Wolsey’s fool, gave him at his lord’s house, and how the hogsheads of gold were known by this means (London: Vere and Wright, 1676; repr. James Caulfield, 1794), p. 23.

Image credit: A page from A Pleasant History of the Life and Death of Will Summers (1676), Folger Shakespeare Library.