Who is that man? 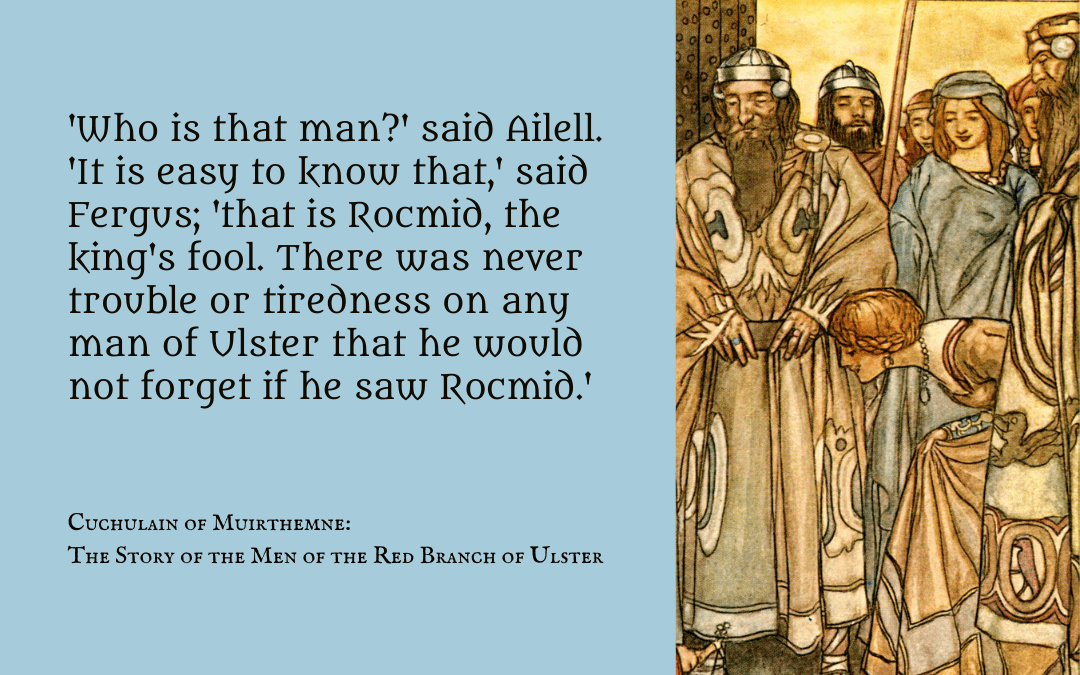 From the Ulster Cycle in Irish mythology, we are introduced to Rocmid, jester of the king of Ulster Conchobar / Conchubar.

‘I saw another man with Conchubar,’ said Mac Roth, ‘and he having a smooth, dark face, and white eyes in his head; a long bronze rod in his hand, and a little bell beside him, and when he touched it with his rod, all the people near him began to laugh.’

‘Who is that man?’ said Ailell.

‘It is easy to know that,’ said Fergus; ‘that is Rocmid, the king’s fool. There was never trouble or tiredness on any man of Ulster that he would not forget if he saw Rocmid.’

Bells are often associated with fools, and in medieval depictions they regularly have some kind of stick, either with a bladder attached or the version called a marotte, with a carved head of a fool.  However, there is frequently some overlap between poet and fools, and Rocmid is described as having a bronze rod in his hand, and bells.  In another Irish myth, the dwarf poet of the king has a bronze rod with silver bells attached, said to be used by poets to silence the audience before a recitation:

After this, one day, as Fergus and his lords sat at the feast, the gatekeeper of the palace of Fergus in Emania heard outside a sound of ringing; he opened the gate, and there stood a wee man holding in his hand a rod of white bronze hung with little silver bells, by which poets are wont to procure silence for their recitations.

It’s curious that Rocmid has only to touch the bell with the rod to get people laughing; I wonder if this is the kind of reaction we can develop when we are used to being amused by someone – they only have to say ‘hello’ to make us feel like laughing.

The ‘white eyes in his head’ suggests Rocmid may have been blind, echoing the idea of blind poets or bards.

And what a testimony to his skills as a jester, that there was no trouble or tiredness you wouldn’t forget if you saw him.  Don’t we all need a Rocmid?

Sources: `The Awakening of Ulster’, in Cuchulain of Muirthemne: The Story of the Men of the Red Branch of Ulster, trans. by Augusta Gregory (London: Murray, 1902), pp. 258-59; Chapter IV of T.W. Rolleston, The High Deeds of Finn and Other Bardic Romances of Ancient Ireland, illus. by Stephen Reid (1920).