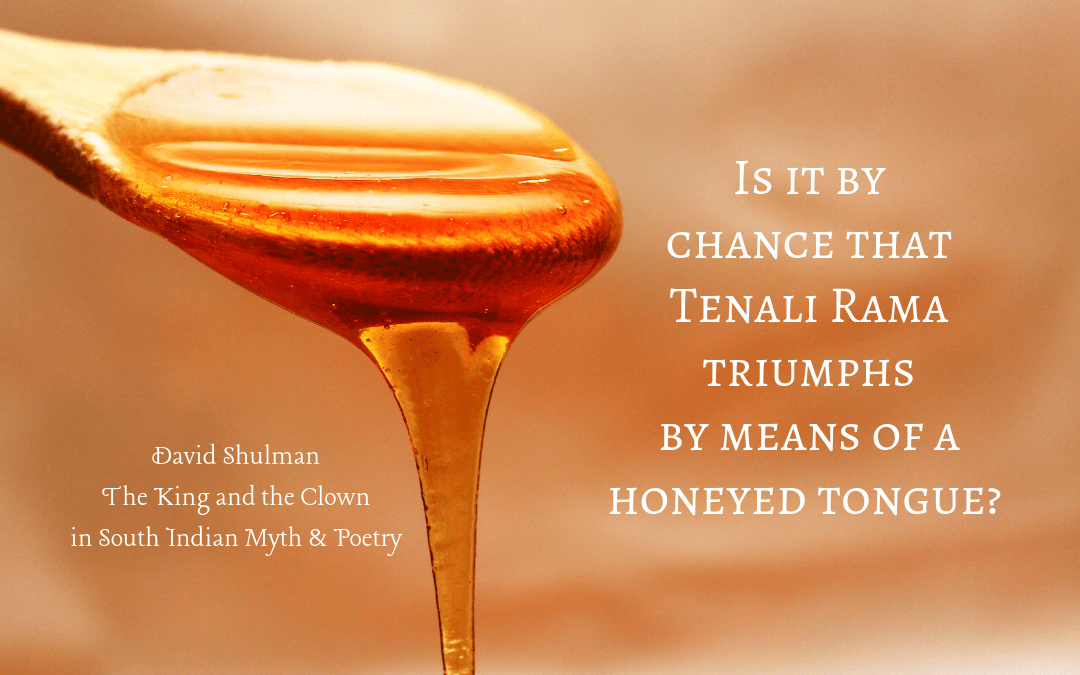 Another example of Tenali Rama’s quick-witted defiance. He is said to have served King Krsnadevaraya (r. 1509-1529), though in all probability was a vivid figment of the collective imagination pegged to a real king.

This curious anecdote concerns the scatological humiliation of the jester in the form of a ‘dream’ recounted by the king, followed by his table-turning retort. Particularly curious are the echoes between this tale of a 16th century Indian folk fool and a strikingly similar story about the Chinese Shi Dongtong (Moving Bucket), jester at the court of Emperor Gaozu of the Northern Qi who reigned nearly 1000 years earlier (r. 550-59).  You can’t help wondering if the story made its way from China to India as part of the trade and religious exchanges going back and forth in the course of a millennium.

It is also a perfect example of the jester’s resilience in the face of humiliation and other occupational hazards.  As David Shulman wryly concludes, ‘Is it by chance that Tenali Rama triumphs by means of a honeyed tongue?’

‘The king decided that he must, for once, pay Tenali Rama back for his persistent impudence; so, one day, when all the courtiers were assembled before him, he called the jester near and announced that he had had, that night, an unusual dream:

“We were walking,” said the king, “just the two of us, in some unfamiliar, deserted place.  Suddenly we found ourselves on a narrow footpath between two deep pits: one of them was full of honey, and the one on the other side was filled with stagnant gutter-water, urine, and faeces.  We hesitated for a while, but finally decided that we must somehow traverse this path. Though we were walking with extreme care somehow or other I slipped and fell into the pit of honey. But you fell into the pit of urine and excrement.”

At this, the courtiers clapped their hands in delight – what an appropriate fate for Tenali Rama!  The king silenced them and continued,

“Well, I swallowed as much honey as I could and then worked my way back onto the path. I couldn’t bear to see what state you were in: you were breathing hard, struggling somehow to reach the shore. But halfway up you lost your grip and fell back into the pit, head first.  At that moment I suddenly awoke.”

Tenali Rama stood still as a rock, while all the others giggled.

The next day he came to the court, as usual, in the morning.

“Yesterday you told me your dream,” he said to the king, “and last night I saw its continuation in my dream. You were out of the honey pit, while I, after a great effort, finally got back up on the path. But we could hardly go home in that state: so I licked of all the honey on your body with my tongue, and you then cleaned me in the same way.”‘