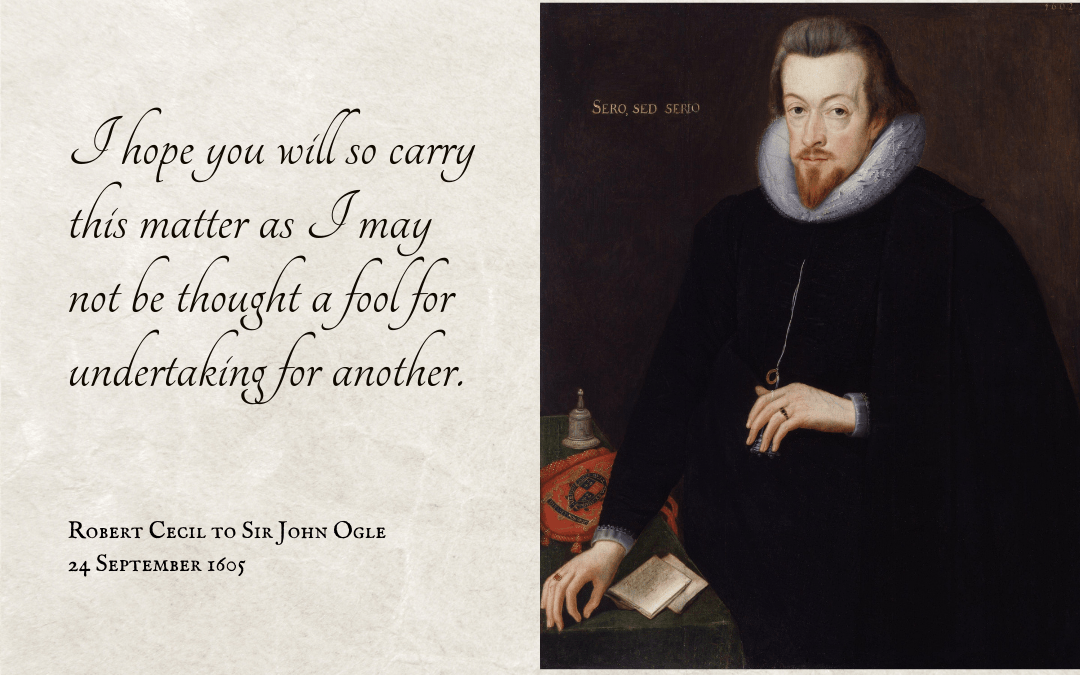 A curious and detailed note from Robert Cecil, Earl of Salisbury (1563-1612), a close advisor to James I, and son of an even closer advisor to Elizabeth I, William Cecil.  Here he has to deal with a diplomatic issue which he’d rather not have to, as he takes pains to explain the situation to Sir John Ogle.

It seems a Spanish jester, close to the king and queen of Spain, turned up with the Spanish ambassador, and asked for safe passage to travel to various places.  Cecil asks that this can be arranged, and his safety assured, as well as suggesting that some of Ogle’s staff (or jesters?) be assigned to make sure the Spanish jester is cared for appropriately.

Particularly noteworthy is the fact that the care of a foreign jester was considered an important enough diplomatic issue for someone of Cecil’s standing, Lord Privy Seal and later Lord High Treasurer, to have to take into account.  Also interesting that he refers to the notion of jesters (buffoons) being commonly used as spies, although in this case he doesn’t appear to consider it a real danger.

He mentions that although the Spanish jester was known for ‘railing and scoffing’, he was generally inoffensive, and if anything quite flattering to his hosts.  That said, Cecil suggests that the favour shown towards this jester by his Spanish masters was partly due to the entertaining way he would recount the adventures of his travels once he returned home.  One can imagine that any flattery would fly out the window at that point.

And I like Cecil’s closing line, expressing the hope that raising this issue of the fool won’t make him look like one.

Although I know that wolves do often walk under sheep’s clothing and how usual it is for buffoons to be used as spies, yet because I hold it a weakness in wise men to believe that all sheep are wolves, or to be so transported with jealousies as not to distinguish between necessary caution and other endless apprehensions; and because the nature of my place ties me to hold all terms of civil courtesy with the subjects of foreign princes, I am now forced to be a dealer in a matter to which I have small inclination, as fearing to be misjudged by those that are not well-informed of all particular circumstances.

When the Lord Admiral returned out of Spain, there came in the company of the Spanish Ambassador a Spanish jester, in whom the King and Queen of Spain take great delight, the rather because he is of such a humour of ranging abroad as he becomes delightful at his return to those that hear his foolish discourses of his adventures; wherein he hath one great quality that is predominant, which is, to be one of the fearfullest creatures of the earth.

Now this fool hath a great desire to see those Provinces by the favour of his Majesty’s protection, and in this divers great subjects of Spain have sent unto me to take some care under his Majesty that he may be so recommended as not to miscarry by any violent injury. In which, although I know that all men of judgment and discretion will hold it contemptible to dream of any his practice in his journey, yet upon his Majesty’s desire to Mons. Caron that such a request might not be refused, I thought it convenient to advise his Majesty to prepare the way by Mons. Caron to his Excellency, that he (knowing the nature of the man) might use it as seemed best to his wisdom.

Of whom this is all I will say, although there be wit enough in his forehead to observe the places where he comes, yet for any humour he hath of railing or scoffing, I do assure you that in all his carriage here these 2 or 3 months never man had cause to complain of him, but rather he hath not forborne to flatter us, with censuring his own Court and country with the greatest freedom in the world, and plainly told the King’s own Ambassador to his teeth that he had rather see Count Maurice than all the princes in the world. When the Constable of Castile commanded in France, he got passport to come to the French King, who then took great pleasure in him. Of all these circumstances I pray you take some opportunity to inform his Excellency, and if upon your suit from me he would give the more careful order that in his passage there may be no violence, I shall take it for a great favour.

For the rest I entreat you, while this poor fool is there, to cause some of yours that have discretion, to have some eye over him for his lodging and diet, for he is sickly, and so to further him to see the Prince Maurice and his camp, as it may serve him hereafter to talk of his usage, and yet not to bring him within shot or danger. That done (for which 3 or 4 days’ stay may serve), the sooner you shall send him away the better, seeing he is presently to return from hence into Spain. I hope you will so carry this matter as I may not be thought a fool for undertaking for another.—From the Court at Hampton Court, 24 Sept.