On madness, feigned or real 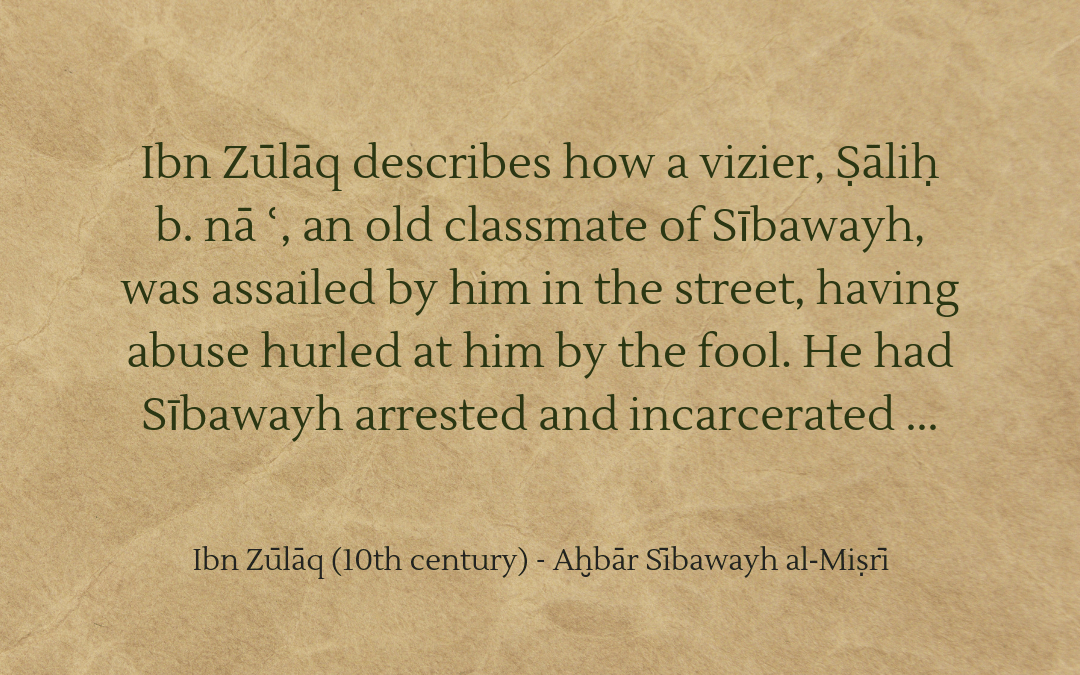 It was a happy moment to discover this first hand account of a 10th century ‘wise fool’, Sībawayh the Egyptian (897-98 – 968-69 / 284-358). I am grateful to Mathieu Tillier’s paper for bringing him to light and translating a number of episodes into French.

Sībawayh was known to be insane and as such was not only tolerated in saying things which would have been unacceptable in a ‘normal’ citizen, but also immensely popular in his home town, where people gathered around to hear his unsparing razor-sharp barbs, fired off at all and sundry for hypocrisy, corruption or immorality. In particular, he didn’t hesitate to lob his brickbats at people in power, many of whom went out of their way to avoid crossing paths with him in the street. Or tried to buy him off with gifts and pensions (he took what was offered, but it doesn’t seem to have silenced him entirely).

This story told by his biographer, Ibn Zūlāq is telling for the fact that, having offended a vizier, he was in grave danger of being executed by the governor, on the grounds that his madness was feigned.  It was only on the intercession of another who interviewed him and established that he was genuinely insane, that his execution was commuted to having some sort of treatment.

Also noteworthy, the vizier who sought to have him incarcerated and executed was then made to pay him a pension instead.

‘Ibn Zūlāq describes how a vizier, Ṣāliḥ b. nā ʿ, an old classmate of Sībawayh, was assailed by him in the street, having abuse hurled at him by the fool. He had Sībawayh arrested and incarcerated in the hospital (māristān), then accusing Sībawayh of being someone who ‘pretended to be possessed’ (yuẓhiru l‐wiswās) in order to have the freedom to insult people.

The Governor, Al‐Iḫšīd, ordered Sībawayh to be executed, demonstrating that it was his avowed madness which had hitherto protected him. Abū l‐Ḥasan al‐Sāmarrī al‐Ṣūfī visited Sībawayh at the hospital, and saw that he was a savant in many disciplines, thereby interceding on his behalf. Al‐Iḫšīd understood that his madness was not a feint, and commuted his sentence into an obligation to receive treatment. He also invited Sībawayh to the court to meet him and ordered Ṣāliḥ to pay him a pension in recompense.’