My horse, my horse

Jester Meng 優孟 is one of the Chinese jesters immortalized in what may be the world’s first historical study of jesters, by China’s Herodotus Sima Qian 司馬遷 (c. 145-86 BC).  He served King Zhuang of Chu 楚莊王 (r. 613-591 BCE) and Sima Qian gives several lively accounts of his indirect interventions.  This account was so well known that well over 1,000 years later it was cited as a reference point for a jester using humour to change a ruler’s behaviour. 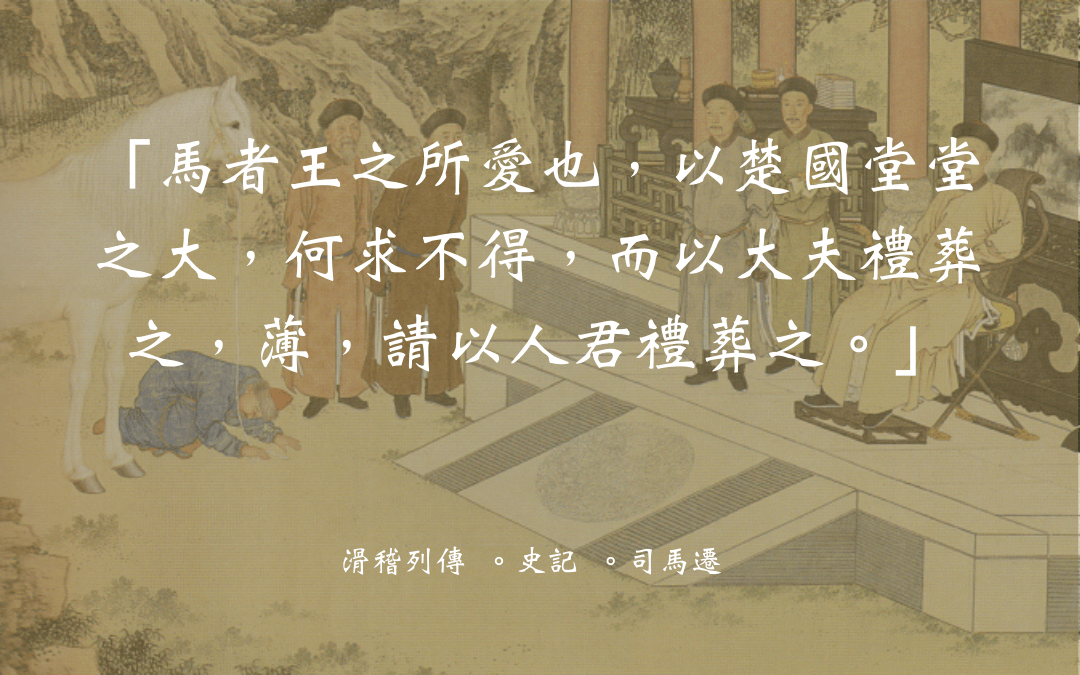 Jester Meng uses the classic technique of reductio ad absurdum in which the fool goes overboard in supporting royal plans (or whims), allowing the boss to conclude for themselves that they’ve gone too far.

Jester Meng of the Kingdom of Chu was originally a musician.  Quick-witted, he often gave indirect advice in the guise of a joke.  The king had a favourite horse which he cosseted until it died of overweight.  He arranged for the horse to be buried with all the ceremony due to a dignitary and when some of his courtiers tried to suggest that this was a little excessive he issued a decree stating that `whoever dares to submit contrary advice to me about my horse will be committing a crime to be punished by death’.  Jester Meng entered the king’s presence and, looking up to heaven, cried his eyes out.  The king was shocked and asked what was the matter:

“It’s that horse of yours, Your Majesty,” sobbed Meng.  “You loved him so much.  With a great powerful nation like Chu at your disposal anything you want is yours for the asking.  Yet all you’re giving him is a minister’s burial.  That’s a bit shabby.  I beg you to bury him with the rites customarily accorded a monarch.”

He then listed all the sumptuous arrangements necessary to give the beloved horse a suitably impressive burial, including bestowing on his descendants a fief of ten thousand households, before ending innocently with the words, `Then, when the rulers of the other states in the world hear of this, they will all know that Your Majesty prizes horses above mere men!’  The king realized his folly and asked the jester how to make good his error, then following Meng’s advice to:

“Let a clay oven serve as his outer coffin, and a bronze tripod cauldron as his inner coffin.  Shower him reverently with ginger and dates, strew offerings of magnolia upon him, and sacrifice the purest white rice around him.  Enshroud him with the light of a fire, and lay him to rest in the bellies of men.”