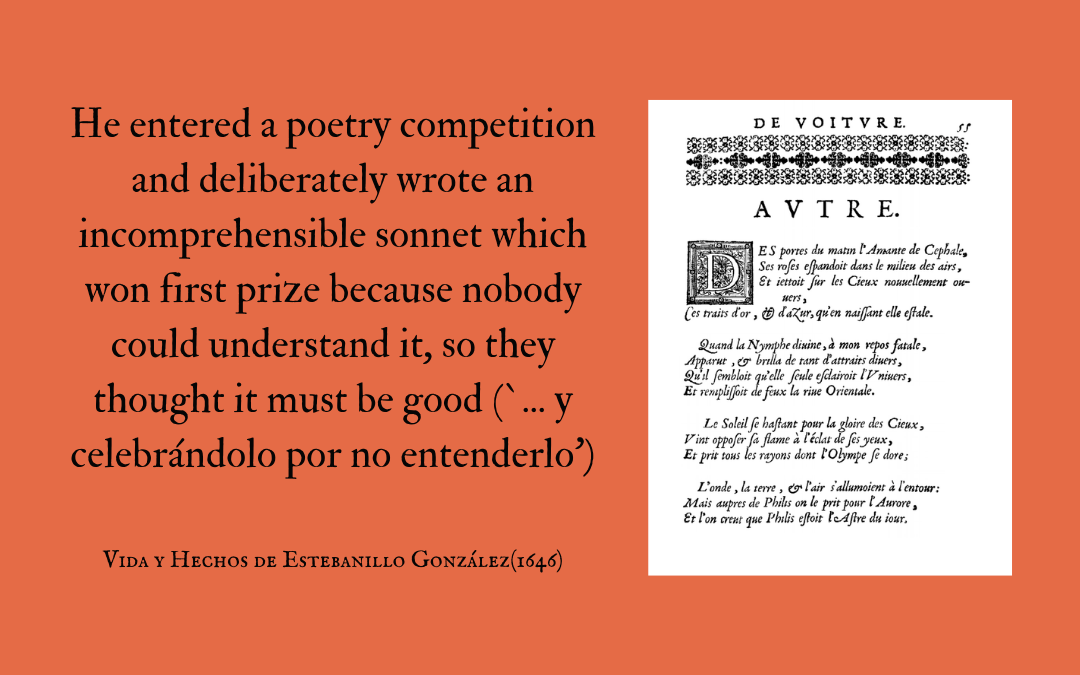 Jesters had some overlap with court poets, perhaps partly due to the fact that versifying was a common capability among them.  In some cases, this included the capacity to trot out extempore verse, whether making up a rhyme or ditty to entertain or edify.  In the case of a Spanish jester, the improvised ditty was merely playful, but in a Chinese example, it was to shame the emperor for having lost territories.

Here, the fictive Spanish jester Estebanillo González, who was said to have served Ottavio Piccolomini (1599-1656), the Duke of Amalfi and one of the most powerful people in Spain as well as a key player in the Thirty Years War (1618-48), used poetry to mock the pretensions of others.  He entered a poetry competition and deliberately wrote an incomprehensible sonnet which won first prize because nobody could understand it, so they thought it must be good (`… y celebrándolo por no entenderlo’).  Jesters often had an irresistible urge to puncture pomposity, and we will be sharing a number of examples, including lively sallies aimed at the self-importance of priests and other clergy.

GAP MAP: It is time for a modern and scholarly (but lively) translation of this 17th century Spanish masterpiece, the life of Estebanillo Gonzalez who may or may not have existed (I once leaned towards believing he did before coming round to the idea that he is a splendid fiction).  There is an 18th century English translation, now available in an affordable facsimile print edition, see references below.

Image credit: Vincent Voiture, sonnet ‘La belle matineuse’ (1650).  Note this is not the sonnet composed by Estebanillo Gonzalez, I simply chose an illustration of a sonnet of about the same epoch!