A juggler’s skills, a jester’s warning 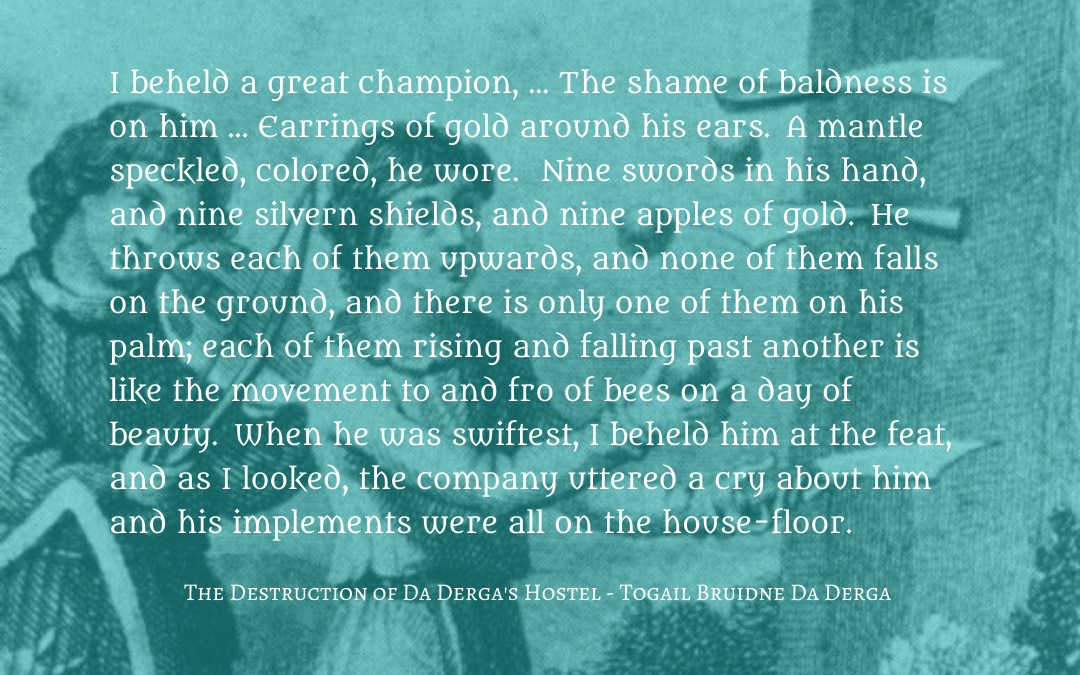 In `The Destruction of Da Derga’s Hostel’ (`Togail Bruidne Da Derga’), an Irish saga written no later than the eighth or ninth century, Taulchinne, juggler to Conaire the High King of Ireland (whose dates vary according to sources from c. 110 BCE to c. 14 CE) combined his juggling skills with the jester’s knack of forewarning the king.

This ancient tale has a wonderful description of Taulchinne and I particularly liked the simile for his superb mastery of swords, shields and apples of gold, all flying through the air like ‘the movement of bees on a day of beauty’.

Note, in addition to his capacity to forewarn, his baldness (often associated with fools in medieval Europe) and his ‘speckled, coloured’ mantle echoing something of the motley we associate with the jester.

“There,” said Ingcel, “I beheld a great champion, … The shame of baldness is on him … Earrings of gold around his ears.  A mantle speckled, colored, he wore.   Nine swords in his hand, and nine silvern shields, and nine apples of gold.  He throws each of them upwards, and none of them falls on the ground, and there is only one of them on his palm; each of them rising and falling past another is like the movement to and fro of bees on a day of beauty.  When he was swiftest, I beheld him at the feat, and as I looked, the company uttered a cry about him and his implements were all on the house-floor.  Then the prince… said to the juggler: `We have been together since thou wast a little boy, and till tonight thy juggling never failed thee.’  `Alas, alas, fair master Conaire, good cause have I.  A keen, angry eye looked at me… Battles are fought with it,’ said he.  `It should be known till doomsday that there is evil in front of the Hostel.'”