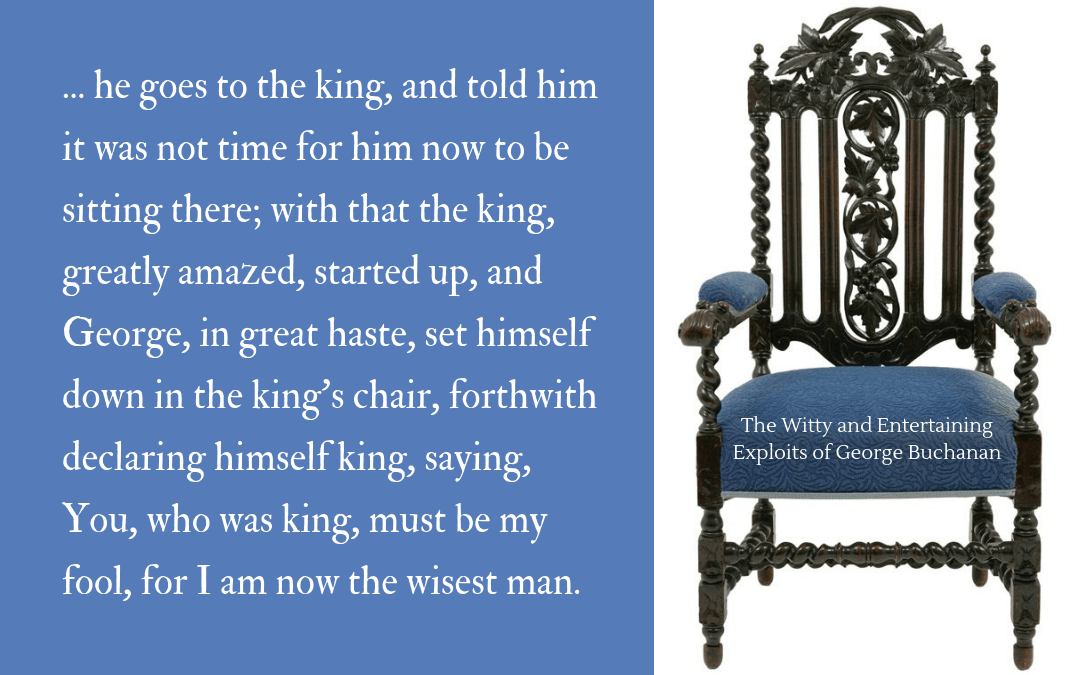 A recurrent theme in the fool-king relationship is that of role-swapping, more formally known as ‘inversion’.

Fools, jesters, clowns, are often said to turn the world on its head – in medieval Europe there was even a genre of art focused on this world-upside-down-turning.  You see it too in Saturnalian and related rituals where things are flipped topsy-turvy for a limited time period.  You’ll see this notion turning right side up in future posts.

George Buchanan (1506-82), was known as a scholar-jester to James VI of Scotland / James I of England (r. 1567-1625), and stories about him abound, including in dedicated jest-books. In one account, he engineered such a role-swap to shock the king into acting more responsibly. Determined to cure the king of happily signing unread documents, Buchanan presented him with a document which transferred regal authority to himself for fifteen days. James signed and returned it, and was then astounded to find himself ejected from his royal seat:

‘No sooner had he received it, but he goes to the king, and told him it was not time for him now to be sitting there; with that the king, greatly amazed, started up, and George, in great haste, set himself down in the king’s chair, forthwith declaring himself king, saying, You, who was king, must be my fool, for I am now the wisest man.  The king at this was greatly offended, until George shewed him his seal and signature. From that day the king always knew what he signed.’

See a popular folk tale of Buchanan’s friendly relationship as jester to the king, and another example of the king becoming the fool, from a German play by Frank Wedekind.