How to live in peace and joy 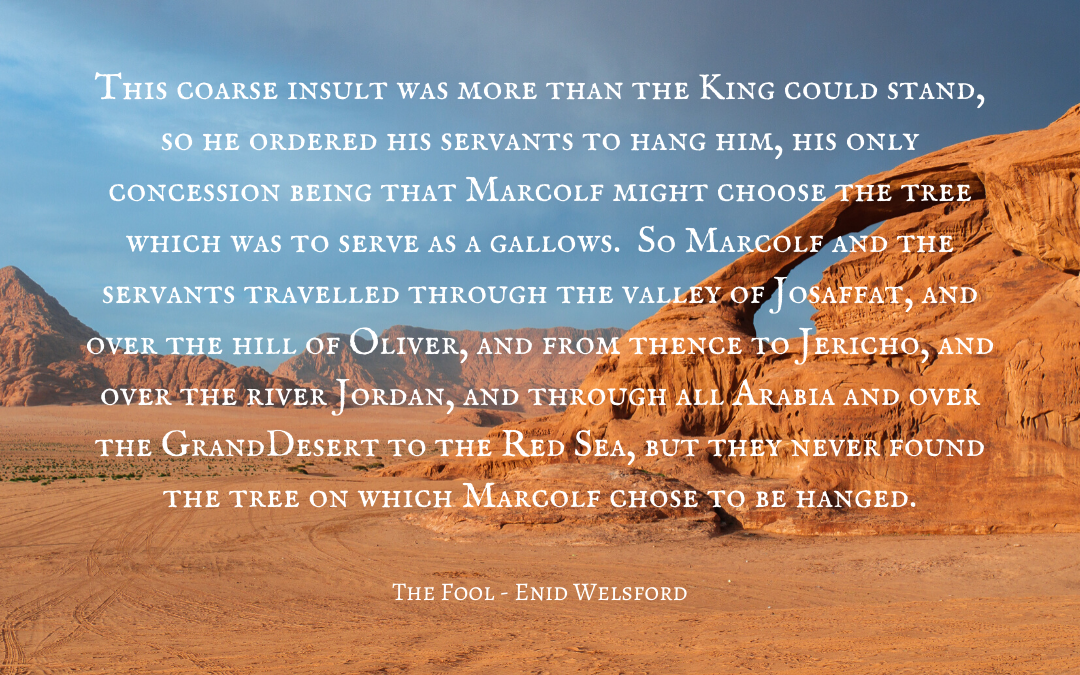 Marcolf is the eternal folk fool, paired with a king noted for his wisdom, Solomon, whom Marcolf always manages to best.  Tales of his irreverence were in wide circulation in medieval Europe.

Here he resorts to a classic fool trick which is to follow the king’s instructions to the letter, blithely ignoring their intended meaning, deploying the kind of wilful literalism children use sometimes to circumvent parental constraints.  There is a whole class of such stories in which the jester is told never to ‘show their face’ or ‘set foot’ in court again, and then turns up soon after somehow managing to hide the face or prevent the feet touching the ground of the court.  (We’ll be sharing these stories in the coming months.)

Marcolf’s solution to the ‘don’t show your face again’ form of banishment is to show his buttocks instead.

Duly offended, Solomon orders him to be hanged.  The trickster-fool wriggles out of the death sentence, again a whole class of anecdotes being dedicated to fools evading execution often through a nifty use of a condemned man’s right to a Last Wish.  Marcolf innocently asks only that he be allowed to choose the tree from which he will be hanged.  He then leads his executioners the length and breadth of Biblical lands without ever finding a tree that meets his exacting standards.  In the end they give up and he goes home to live ‘in peace and joy’.

At that Solomon was so angry that he said: ‘Go out of my sight and let me never look you between the eyes again.’  Then Marcolf crawled into an old oven and lay there in such a posture that when the King found him he could only see his back view, not his eyes.

This coarse insult was more than the King could stand, so he ordered his servants to hang him, his only concession being that Marcolf might choose the tree which was to serve as a gallows.  ‘So Marcolf and the servants travelled through the valley of Josaffat, and over the hill of Oliver, and from thence to Jericho, and over the river Jordan, and through all Arabia and over the Grand Desert to the Red Sea, but they never found the tree on which Marcolf chose to be hanged.’  So the wily peasant returned safely home and lived in peace and joy.

See also two Chinese accounts of jesters talking their way out of an imminent death sentence, one by making a pun on his own name and that of the emperor, and the other through the simple exercise of wit and charm.