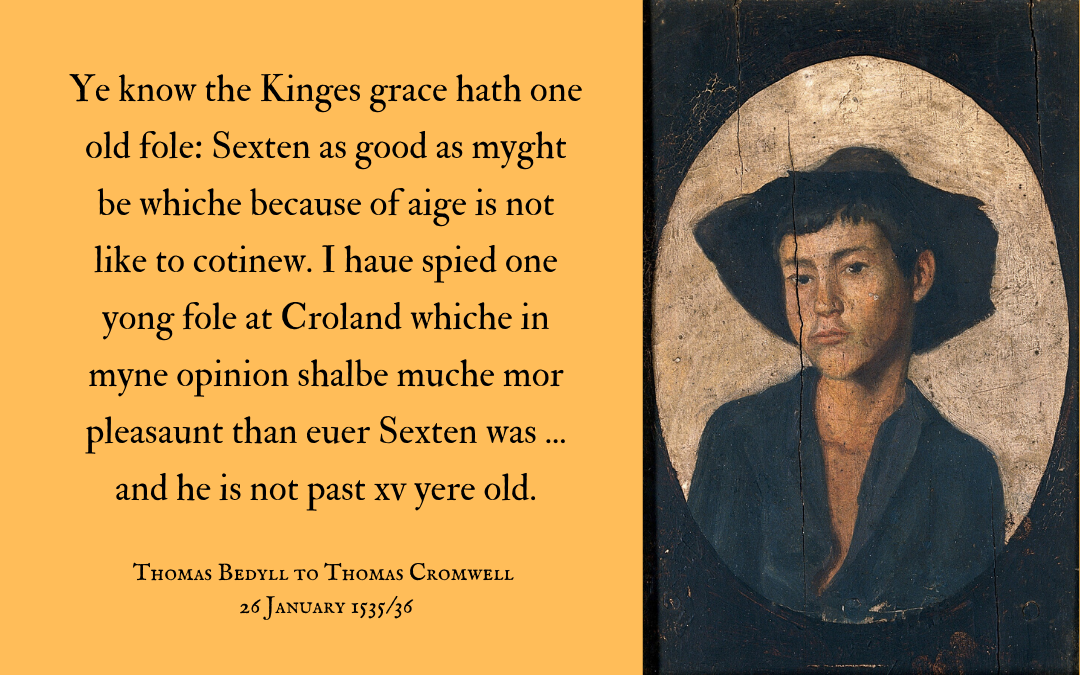 Court fools seem sometimes to have been recruited in a haphazard talent-spotting manner; this is not the only example of someone noticing a suitable candidate on their travels and making the necessary arrangements for them to be brought to court – the historical German jester Claus Narr is said to have been recruited in this way, though as with many such accounts, we can’t be sure if it is a good yarn told of a real jester, or if it actually happened.

This excerpt from a letter to Thomas Cromwell, though, is an unusually reliable historical piece of contemporary evidence for this meritocratic and impromptu form of fool-spotting. Note that the letter describing a young fool as a suitable replacement for an elderly Sexten is addressed to Cromwell at the peak of his power. It suggests that the appointment of a fool for the king wasn’t a trivial matter.

‘Ye know the Kinges grace hath one old fole: Sexten as good as myght be whiche because of aige is not like to cotinew. I haue spied one yong fole at Croland whiche in myne opinion shalbe muche mor pleasaunt than euer Sexten was … and he is not past xv yere old.’

One suggestion is that the young fool was Will Somers who went on to serve Henry VIII (r. 1509-47) and his successors, and that Sexten (also known by the common fool’s name of Patch) was originally the jester of Cardinal Wolsey, given to Henry VIII as a last ditch attempt to curry favour with the king.

Somers was one of those jesters existing on a spectrum ranging from true to fictive – he existed, he was court jester to a real king, but then plays, jokes and other stories were pegged to him.  One such anecdote, which may or may not have happened, has him being ‘interviewed’ by Henry before winning the jester job.

Note that the image shown here is not a portrait of the fool mentioned; it was chosen simply as it appears to be of a boy approximately the same age.