Crack a joke and slash a tax 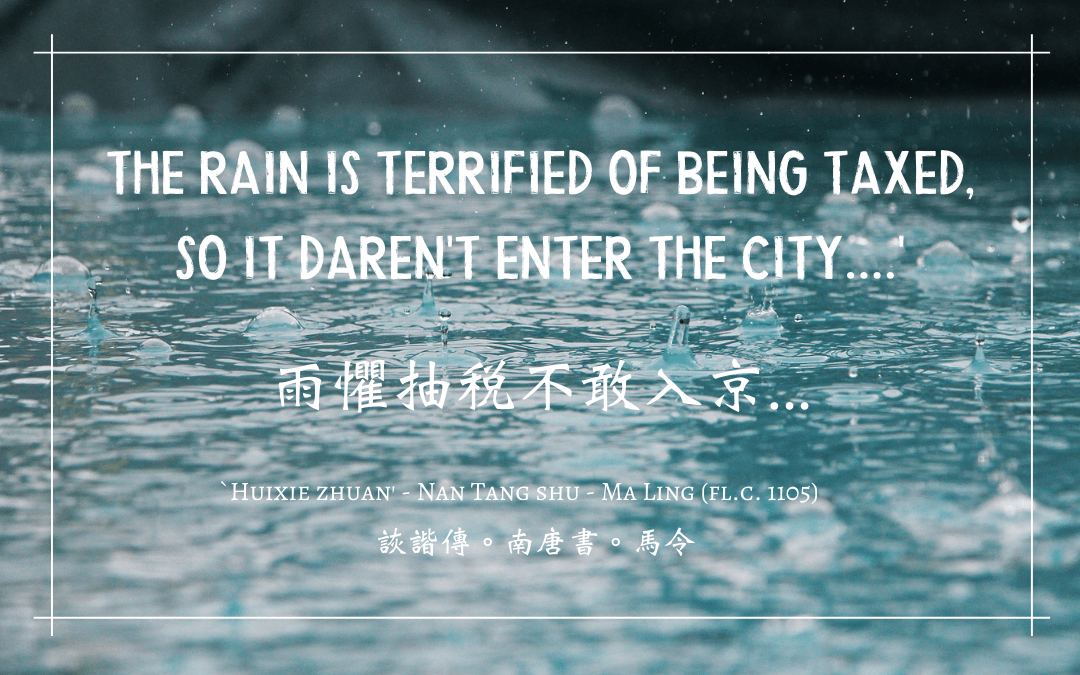 Here a jester cracks a joke in response to a question from the emperor, not only making him laugh but also persuading him to ease excessive taxes.  This isn’t the only example of Chinese jesters intervening to reduce taxes, and we will be sharing other such accounts.

The chronicler tells us that at the time there was a multiplicity of taxes and merchants suffered for it.  In the fields around the capital there was a severe drought and the Southern Tang Emperor Liezu 南唐烈祖 (r. 937-42) asked his courtiers why rain was falling on the land beyond the capital but not in the vicinity, suggesting that the will of heaven had been contravened within the city.

`The rain is terrified of being taxed, so it daren’t enter the city’.  The emperor laughed heartily and give orders to get rid of all excessive taxes, and furthermore, the drought was drowned in heavy rain overnight.

The success of the jester in changing the emperor’s thinking was considered at the time to be on a par with two of the most famous Chinese jester anecdotes given in the `Biographies of Jesters’ by Sima Qian: Jester Meng’s `Horse Burial’ and Jester Twisty Pole’s `Lacquering the Great Wall’.

Interesting to note that the author of this account mentions this, showing not only how impressed people were Gradually Stretching Taller, but also revealing a familiarity with classic accounts of jesters even a good thousand years after they were recorded, and the fact that such stories had become references for what it takes to be an outstanding jester.  It would perhaps be like someone today saying, ‘Oh, he’s as witty / courageous / bold as Lear’s fool when it come to telling the boss a truth or two.’

Also worth mentioning that this is the same jester who lost his life when he used his wit and courage to save the emperor.

A digital version can be found online at the Chinese Text Project.