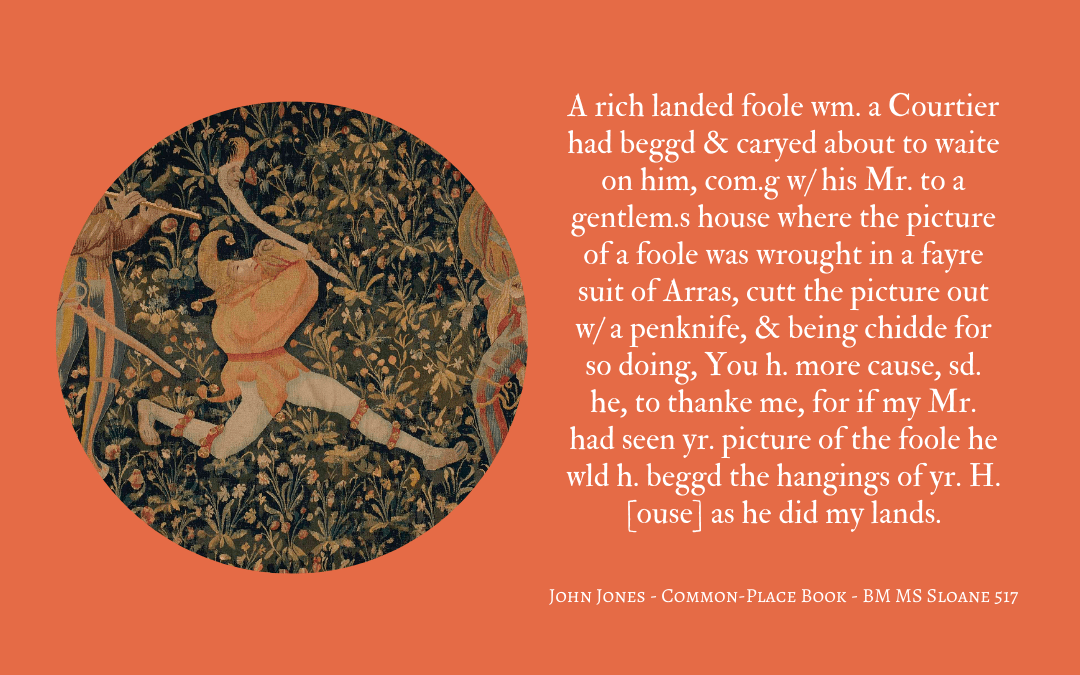 ‘Begging’ a fool meant taking in a person considered incapable of handling their own affairs, and acting as their guardian. So far, so magnanimous.  However, this practice, while potentially offering a degree of care and protection for a ‘natural’ fool, could also be abused, given that the fool’s property also came under the guardian’s control.

In this context, we can see that the ‘rich, landed’ fool in question showed a striking degree of lucidity.  Having been ‘begged’ by a courtier, who then had the fool serve him, the fool visited a gentleman’s house in the company of his master.  Seeing a fool embroidered in a hanging (tapestry or similar), the fool cut it out with his penknife, offering as explanation that he was saving the master of the house the risk of having his hangings taken from him, as the fool himself had seen his lands taken over by the courtier.

A rich landed foole wm. a Courtier had beggd & caryed about to waite on him, com.g w/ his Mr. to a gentlem.s house where the picture of a foole was wrought in a fayre suit of Arras, cutt the picture out w/ a penknife, & being chidde for so doing, You h. more cause, sd. he, to thanke me, for if my Mr. had seen yr. picture of the foole he wld h. beggd the hangings of yr. H.[ouse] as he did my lands.

For an illuminating exploration of the legal frameworks for concluding a ‘natural’ fool could be begged, together with underlying societal attitudes to mental disability, see Eliza Buhrer’s paper, ‘”But what is to be said of a fool?” Intellectual disability in medieval thought and culture’ and I have also recently discovered (but not yet procured, let alone read) a German book on the legal history of court jesters (references below).

See also an extract from the Records of the Parliaments of Scotland to 1707 concerning legislation in the parliamentary register for 5 December 1475, regarding investigations into the nature and duration of a fool’s insanity:

Item, it is decreed and ordained that as there is a brieve made and ordained from our sovereign lord’s chapel for the safety and alienation of lords’ and barons’ lands through idiots and natural fools, insane and madmen during their insanity, which brieve only saves the alienation from the time of serving the brieve and does not fix what has been already done, in case it was done during the time of insanity and madness albeit the person may be as great a fool and as mad before as afterwards, it is decreed and ordained, therefore, that in the future the said brieve be reformed and a clause be inserted to investigate the insanity and the madness and how long the person suffered the condition, and from this it can be known through the investigation that the person is a fool or mad and the time of the alienation made by him after the investigation determines that he was either insane or made shall be of no value but shall be retracted and brought again to him as well as the alienation made after the brieve was served.

Source: John Jones, Common-Place Book, BM MS Sloane 517, fol. 33; note I have not been able to ascertain the date, and have tentatively marked it 16th century – to be corrected if needed when I manage to consult the MS directly; Records of the Parliaments of Scotland to 1707, online.

Buhrer, Eliza, ‘”But what is to be said of a fool?” Intellectual disability in medieval thought and culture’, in Mental and Physical Health in the Middle Ages and Early Modern Period, Fundamentals of Medieval and Early Modern Culture, Albrecht Classen (ed.) (Berlin & New York: Walter de Gruyter, 2014), pp. 314-43.