A mango for mum 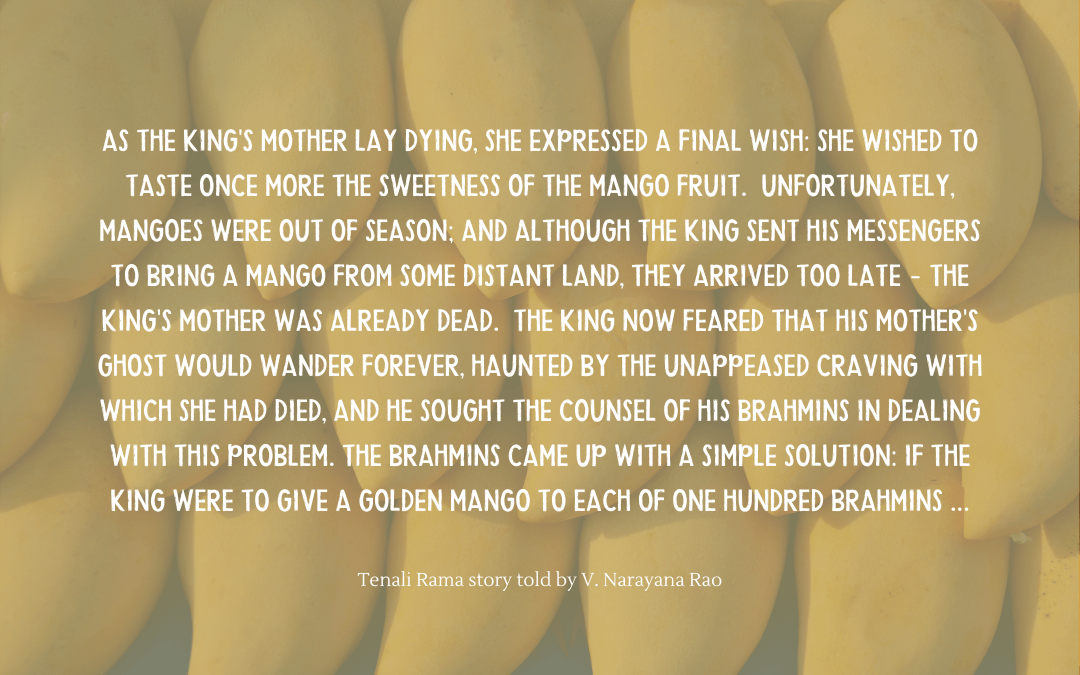 There are many stories of Indian jesters getting the better of Brahmins, often exposing their greed in the process.  Note that the stock clown character of Sanskrit drama, the Vidusaka, was himself a Brahmin, as well as being a jester (some disagree with me on this, and I will address this vast topic elsewhere).

Tenali Rama is one of the ‘big name’ jesters of Indian legend, and it isn’t clear that he has ever been anything but a beloved fiction, despite being linked to a king with real reign dates.  That doesn’t seem to bother him, his exuberance has all the hall-marks of someone who believes in their own existence.

As the king’s mother lay dying, she expressed a final wish: she wished to taste once more the sweetness of the mango fruit.  Unfortunately, mangoes were out of season; and although the king sent his messengers to bring a mango from some distant land, they arrived too late – the king’s mother was already dead.  The king now feared that his mother’s ghost would wander forever, haunted by the unappeased craving with which she had died, and he sought the counsel of his Brahmins in dealing with this problem. The Brahmins came up with a simple solution: if the king were to give a golden mango to each of one hundred Brahmins, his mother’s soul would rest in peace. So Krynadevaraya invited the Brahmins to a feast at which they would receive their gift.

On their way to the royal banquet, the Brahmins saw Tenali Rama standing at the door of his house and beckoning to them; in his hands he held iron rods, their tips red-hot from a fire.  “Do you not know,” he asked them, “that any Brahmin who will allow himself to be branded twice or thrice by these irons will receive two or three golden mangoes?”  Many of the Brahmins happily volunteered to undergo this penance.  But when they claimed their additional golden mangoes from the king, Krishnadevaraya was shocked and angry; he summoned Tenali Rama to the court to explain his actions.  The jester boldly informed the king: “Your Highness, my mother died suffering the torments of rheumatism, and the doctors advised me before her death to place hot irons on her painful joints; but before I could do so, she died.  So I followed your example: just as you sought to allay the distress of your mother’s ghost by your gift to the Brahmins, I sought, through these same Brahmins, to achieve a similar aim.”

See other splendid Tenali Rama stories, including one scatological and one exposing the king’s own greed.