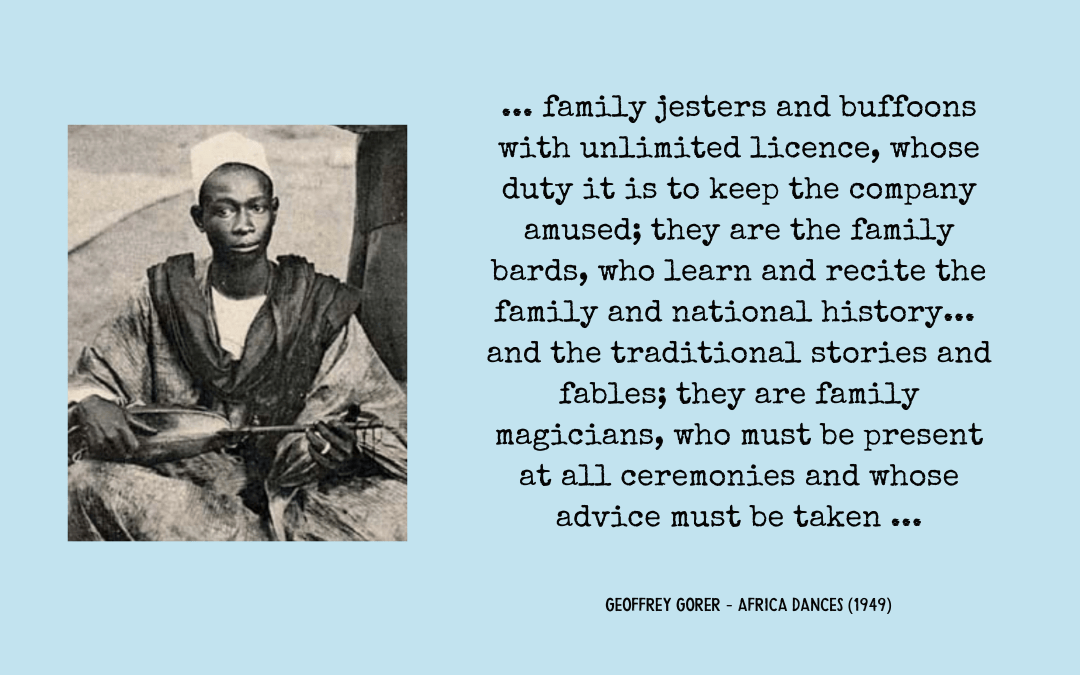 A commonly mentioned feature of the court jester is their acknowledged but informal and ill-defined ‘licence’ to speak out, mock, criticize, tell the truth.  Here is a striking description of a caste (or even out-caste) of clowns said to have had ‘unlimited licence’.  Notable too is that although their status is humble, their advice ‘must be taken’.

The anthropologist Geoffrey Gorer, in Africa Dances published in the first half of the 20th century, mentions that the Wolof people living between the Senegal and Gambia still had a class of clowns, called ‘griots’, who could only marry each other.  The profession was hereditary and they were also the only people permitted to become musicians.  Like the court jester they were of lowly status while enjoying great informal power.  Gorer described them as:

… family jesters and buffoons with unlimited licence, whose duty it is to keep the company amused; they are the family bards, who learn and recite the family and national history… and the traditional stories and fables; they are family magicians, who must be present at all ceremonies and whose advice must be taken; they are the first to hold the newborn baby and the last to touch the corpse; they are the actual recipients of most gifts given to their patrons; they are the spiritual mentors and guides of the young… they console the mourner and comfort the downcast… they are the family’s official boasters… they are lower than the meanest servant and often richer and more powerful than the master.

GAP MAP:  More research is needed on jesters and related roles in Africa.