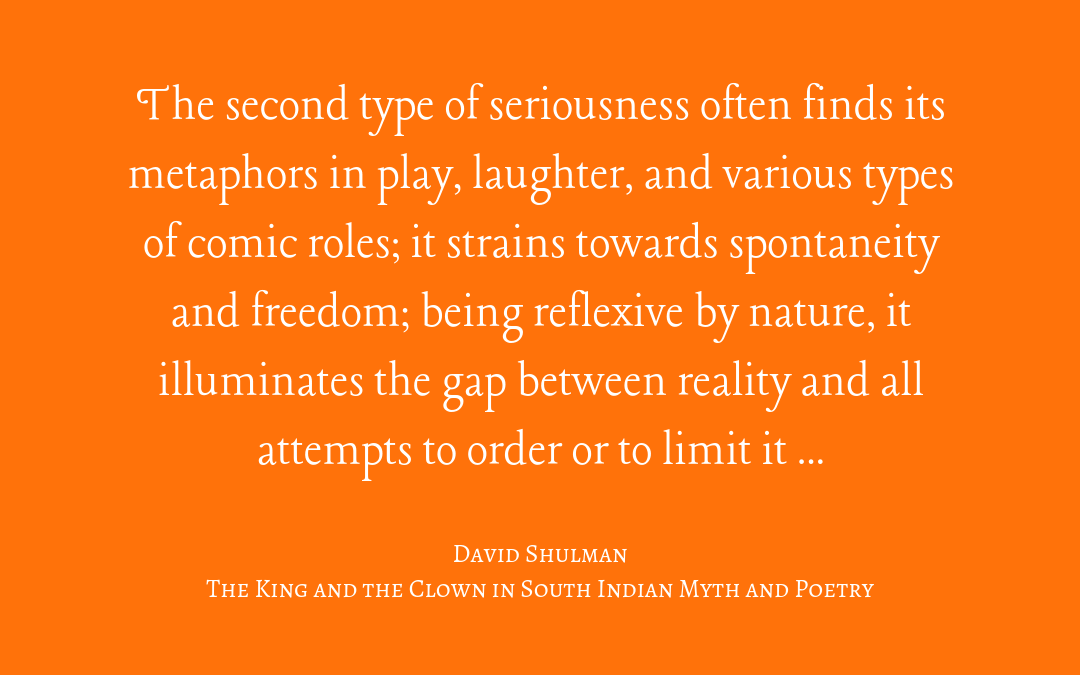 Seriousness may not seem a suitable subject for a website on fools and jesters. However, it is a grave error to consider that what is funny can’t be serious and what is serious can’t be funny (an error occasionally manifest in the notion that writing is less ‘serious’ the more witty it is*).

The messages behind jokes and antics often have a serious, even a deadly serious, aim.

This comment struck me as an interesting analysis of the nature of seriousness in both its earnest form and its comic guises.  It is from the intensely thoughtful The King and the Clown in South Indian Myth and Poetry by David Shulman, which belongs, and will soon be added to, the Fools’ Canon.

I liked the comic version of seriousness, with its capacity to illumine gaps between reality and roles, perceptions, categories, and above all its tendency to lean towards ‘spontaneity and freedom’.

‘The seemingly “serious” tone can be misleading, for, as we have seen in connection with the court jester’s commentaries upon life and language, there are at least two kinds of seriousness, one connected to notions of order and decorum, the other linked to a comic transcendence of order.

The second type of seriousness often finds its metaphors in play, laughter, and various types of comic roles; it strains towards spontaneity and freedom; being reflexive by nature, it illuminates the gap between reality and all attempts to order or to limit it, between roles of any kind (social, mythic, dramatic) and the emotional realities of the individual actors who embody them.’

For other thoughts on joking seriousness, see Niels Bohr’s surprising assertion, Ernest Hemingway, and the revolutionary bums of Eastern Europe.

* Yes, I was once asked to remove a pun from a paper commissioned by an academic journal.  (I refused.)