Humour and survival (I) – Kyiv 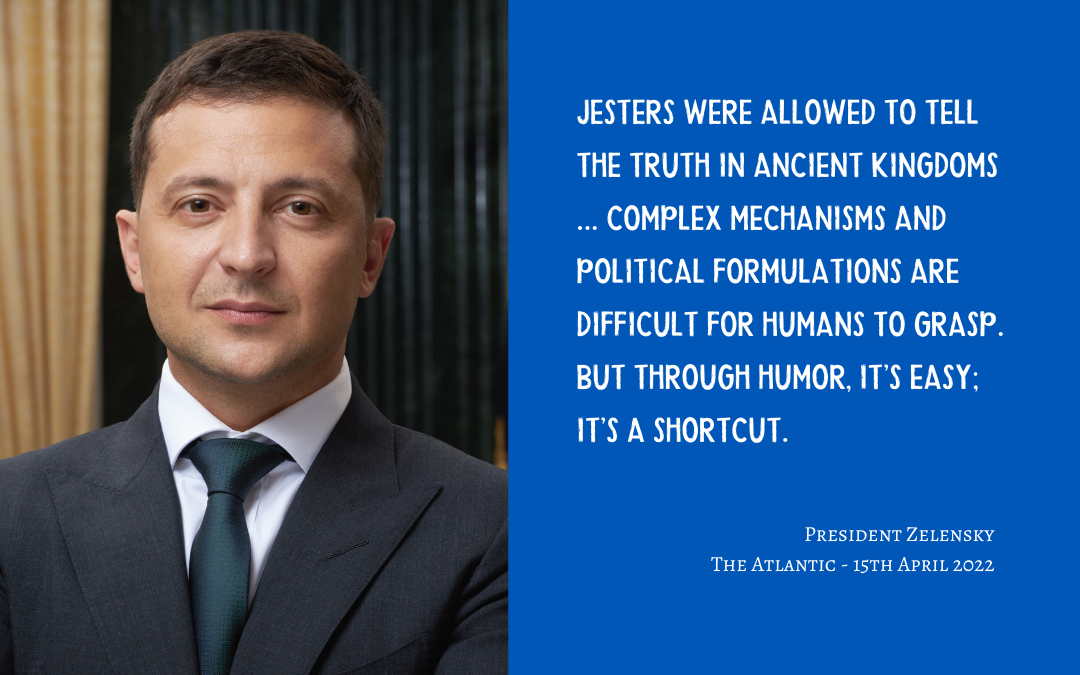 We know from Rubinstein, who mocked and cavorted in the Warsaw Ghetto, that jesters and humour can play a role in even extreme and violent situations.  I was struck by references to this in an interview with President Zelensky by journalists from The Atlantic.  Zelensky clearly has a sharp appreciation of the power and necessity of humour both as a coping mechanism and as a means to get a point across.

He speaks of humour as being a short cut to help people grasp complexities.  The Swiss cartoonist Chappatte similarly described cartoons as being a short cut to communications – they grab you before you can put up your defences.  The joke gets you and you get the joke before more rational, restrained, or politically correct reactions kick in (sometimes even leaving you discomfited at having laughed in the first place).

Zelensky mentions that ‘Jesters were allowed to tell the truth in ancient kingdoms’, and it appears that telling the truth in the contemporary Kremlin court is a life-threatening condition.

So we have the curious juxtaposition of a latter-day jester, in the form of a professional comedian who has become a leader, and a leader who appears to have no truck with truth-telling jesters (or others).

Throughout the conversation, Zelensky displayed his gifts for spontaneity, irony, and sarcasm. He didn’t tell jokes, exactly, but he said that he cannot part with humor altogether. “I think that any normal person cannot survive without it. Without a sense of humor, as surgeons say, they would not be able to perform surgeries—to save lives and to lose people as well. They would simply lose their minds without humor.”

The same is true now for Ukrainians: “We can see what a tragedy we have, and it’s hard to live with it. But you have to live with it … You can’t be serious about what Russian politicians and Lukashenko say every day. If you take it seriously, you might as well go and hang yourself.”

Is Putin afraid of humor?

“Very much so,” Zelensky said. Humor, he explained, reveals deeper truths. The famous television series in which Zelensky starred, Servant of the People, mocked the pomposity of Ukrainian politicians, attacked corruption, and presented the little guy as a hero; many of his sketches were clever satires of political leaders and their attitudes. “Jesters were allowed to tell the truth in ancient kingdoms,” he said, but Russia “fears the truth.” Comedy remains “a powerful weapon” because it is accessible. “Complex mechanisms and political formulations are difficult for humans to grasp. But through humor, it’s easy; it’s a shortcut.”

May the Ukrainians keep their humour flying along with their flag.