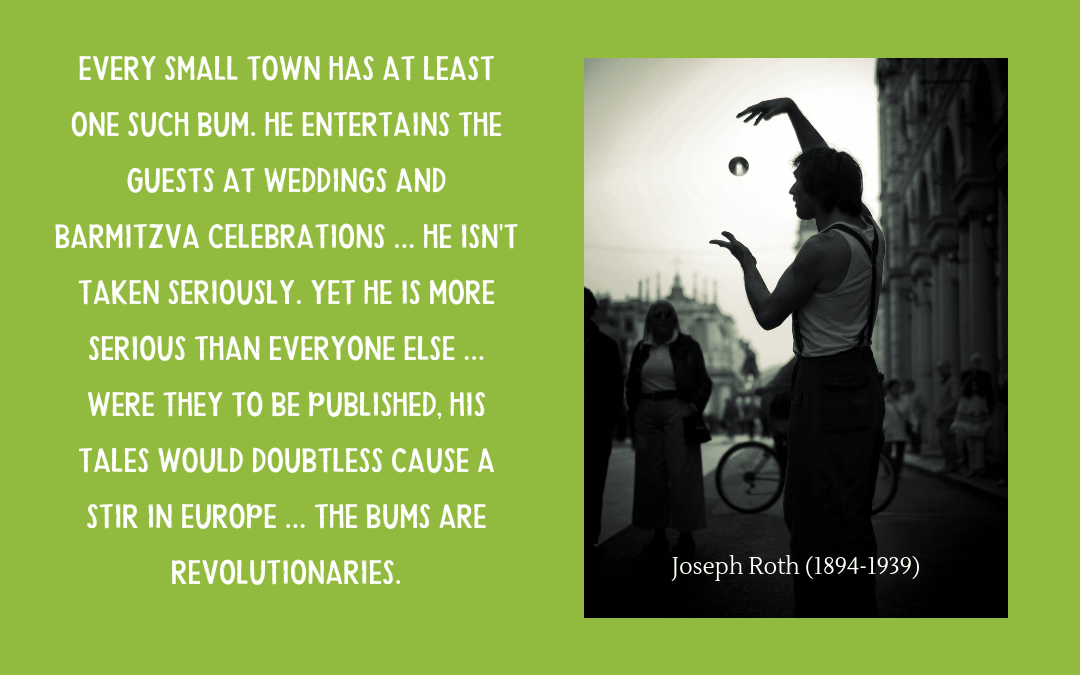 Delighted to encounter these bum revolutionaries, the Jewish jesters who flourished in Eastern Europe, entertaining people at weddings and barmitzvas while stirring things up with their stories.

Note the dilemma of the fool – not being taken seriously even when deadly serious. This seriously-unserious riddle may have helped grant them the license to tell tough truths to big shots.

After all, ‘he’s just a fool, can’t take him seriously’.  But you may still get the point even as you get the joke. It’s part of the power of humour, lowering people’s defenses enough to hit home with something which might be discomfiting otherwise.

Wit, as Shakespeare knew, can be a perfect stalking horse.

That said, in reality, fools, while often being great shaker-uppers, tend not to be revolutionaries; if anything, they try to humanize ‘the system’ from within (the outsider-inside perspective, as it were).

‘The strangest occupation is that of the Eastern European Jewish idler, the crazy clown, the philosopher and the storyteller. Every small town has at least one such bum. He entertains the guests at weddings and barmitzva celebrations … He isn’t taken seriously. Yet he is more serious than everyone else .. were they to be published, his tales would doubtless cause a stir in Europe … the bums are revolutionaries.’

Enjoy a related Yiddish lexical entry.  See also a thoughtful comment on seriousness in playful or humorous forms.  Lastly, a stunning comment that serious subjects, really serious, should only be handled with jokes, by none other than Niels Bohr.