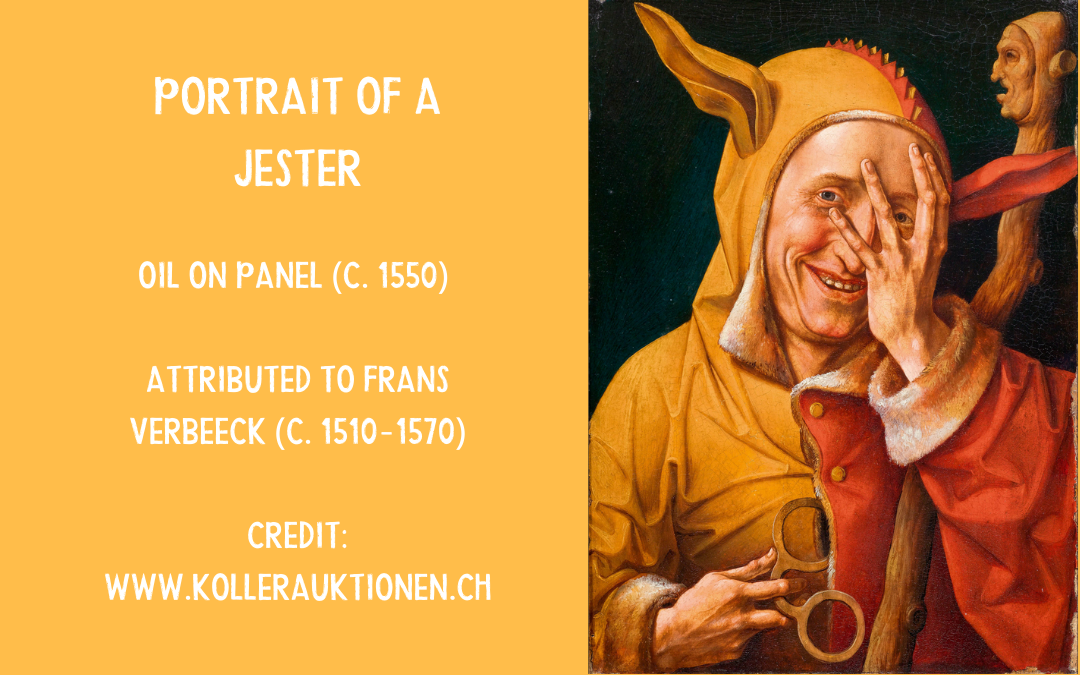 The last in this series of paintings (for now, I keep stumbling across new ones) bears a striking resemblance to our mysterious Moe No. 4.  This one, too, I found on an auction site.  Said to be the work of the Master of 1537, who worked in Mechelen and whose name comes from having had a panel dated to 1537 attributed to him, this artist has in turn been identified as Frans Verbeeck (1510-70), and the painting dated to around 1550, making it later than some of the others we’ve featured.

I call him the ‘merry fool’ as he appears more innocently cheery than the slightly scary Moe No. 2 in our series.  But we see the same props – glasses tucked into his jacket; the marotte in the background, the ass-ear-coxcomb cap and, of course, the peeping through fingers.

The peeping-through-fingers references a proverb meaning something like the English ‘turning a blind eye’ or ‘looking the other way’.  Cavalli-Björkman suggests it could mean to ‘avoid seeing things as they are, particularly if they are unpleasant’.  She mentions a saying alluded to in Pieter Bruegel’s painting The Flemish Proverbs: 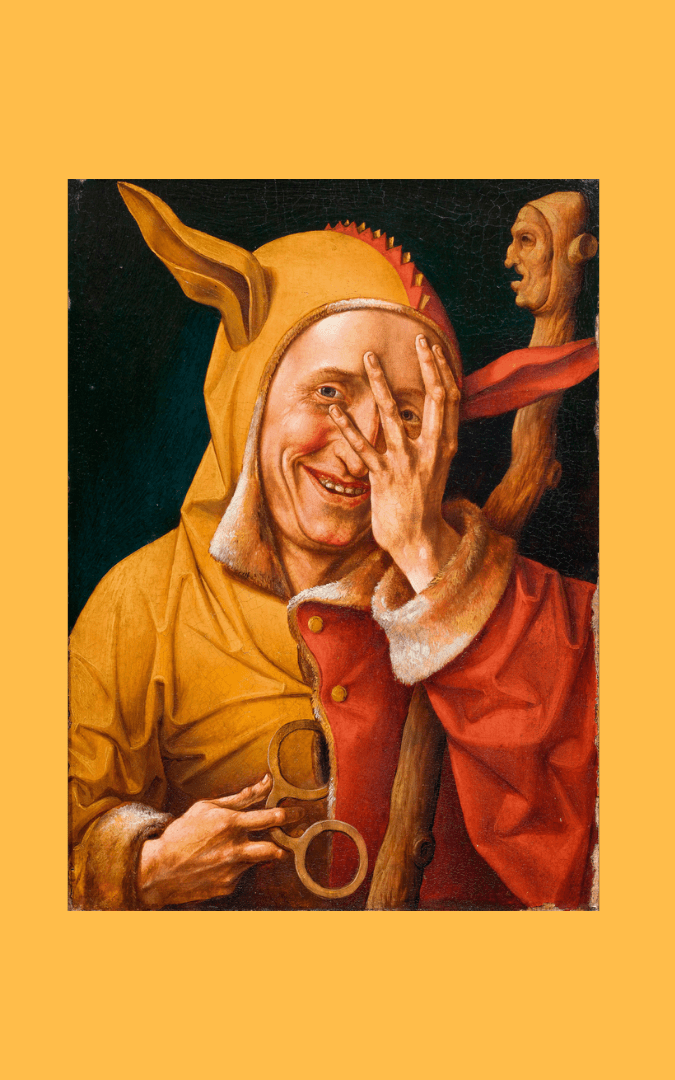 This could suggest something like ‘You’ll never get ahead if you don’t look the other way now and then’.  Is the fool mocking us for turning a blind eye to wickedness, or conniving with us, or is he a fool for doing so himself?   That said, his fingers seem more open than some of the other iterations of this trope, so perhaps he’s turning a slightly less ‘blind eye’ to our sins, or is merely indulging them more openly?

In this as in similar paintings and prints, he holds a pair of spectacles half tucked into his jacket. Cavalli-Björkman mentions a German proverb, ‘To buy someone some glasses’ (‘Jemanden eine Brille kaufen’), which means to deceive or fool somebody.  One commentary moots the possibility that the association with deception could be due to the fact that ‘making glasses at the time was a technical challenge, causing their quality to vary greatly – for this reason, their makers were sometimes considered charlatans.’

Source: Painting of a jester (c. 1550), oil on wood, by the Master of 1537 (Frans Verbeeck?), formerly attributed to Quentin Massys (1466–1530), private collection, previously on loan to the Musée départemental de Flandre in Cassel, whereabouts now unknown.

NOTE:  According to the background text appearing on the auction house website, ‘Dr. Jaco Rutgers concludes in his academic study (25 June 2019) that the Master of 1537 is identical to Frans Verbeeck’.

Craig, Kenneth, ‘Proverb’s Progress: a Fool Looking Through His Fingers’, in The Great Emporium, The Low countries as a Cultural Crossroad in the Renaissance and the Eighteenth Century (Amsterdam 1992), pp. 105-36.

Mellinkoff, Ruth, Outcasts: Signs of Otherness in Northern European Art of the Late Middle Ages, 2 vols (Berkeley: University of California Press, 1993) – this magnum opus touches on many elements in this and related images, rather than making specific references to them.