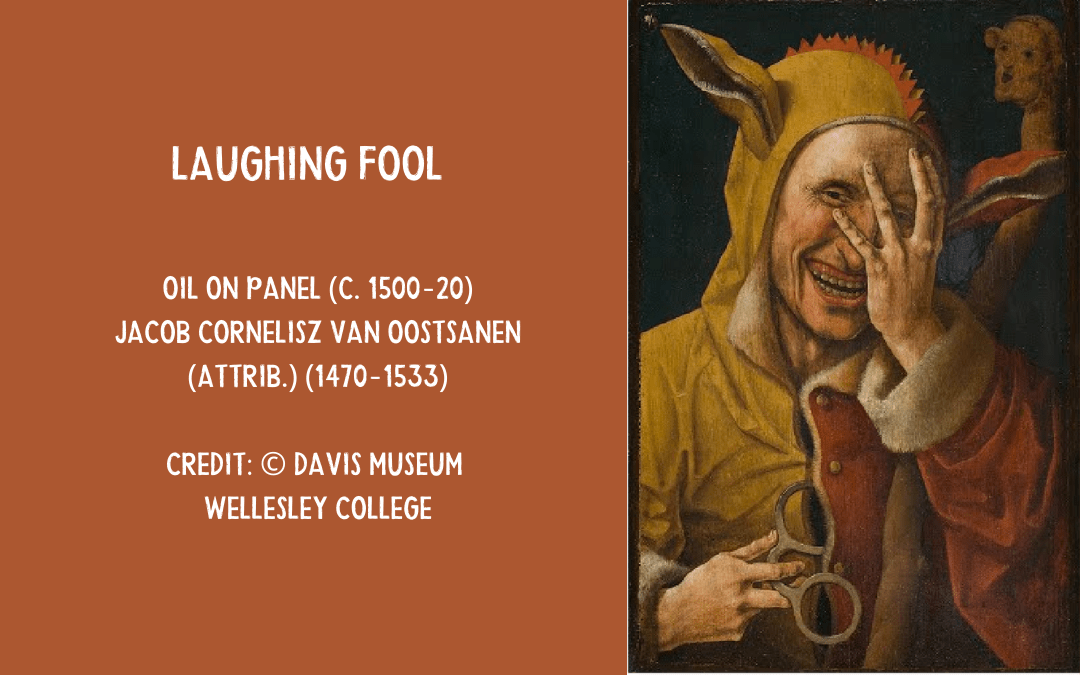 The second in our peeping-through-fingers series is almost identical in stance and props to the anonymous ‘Laughing Jester’ recently featured, including the coxcomb-ass-ear-cap, the glasses half-revealed, and the marotte or fool-stick.

In this case the marotte’s jester-head has its mouth open, whether in a ‘ho-ho’ laugh at the nonsense it is hearing, or in blowing a mocking raspberry, is unclear.  This fool is inclining to his left whereas the Laughing Jester is inclined to his right.

The colour scheme of his costume is similar, though this one has some fur trimming around the sleeves. According to the art historian Cavalli-Björkman, who has written about both paintings: 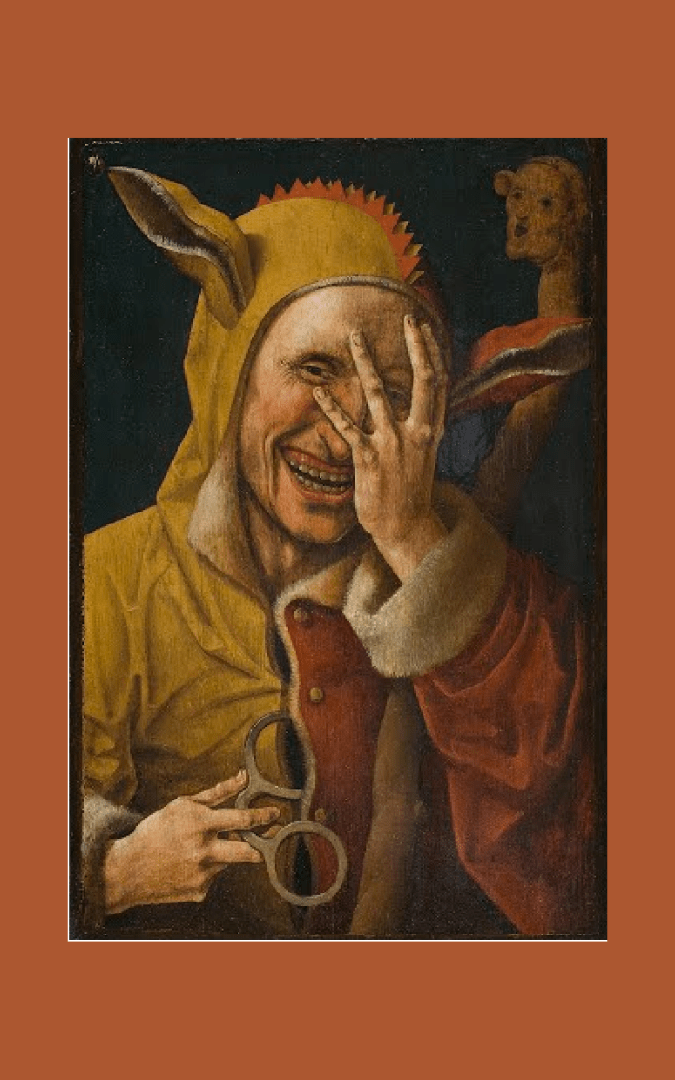 The painting is attributed by the Davis Museum at Wellesley College, where it is held, to Jacob Cornelisz van Oostsanen (1470-1533). However, Cavalli-Björkman questions this and posits an anonymous northern Dutch painter.  Wellesley dates it to c. 1500, Cavalli-Björkman to c. 1520, i.e. the same time as the Laughing Jester it resembles.  She goes further, attributing both paintings, plus a third we will feature shortly, to the same anonymous master, on the grounds that:

Stylistically they are very much alike, painting in an old-fashioned, rather abrupt and angular manner with a hard surface of paint in brilliant colours on a dark background.  This return to a 15th century style was not unusual in the northern Netherlands around the 1520s.

While hesitating to question the opinion of a respected art historian, and while I agree that the two are remarkably similar in their composition,  to my eye, this Laughing Fool looks rougher in appearance than his comparatively polished and dapper counterpart, though this is based on viewing photos not the original paintings.

Pending a consensus, we will continue to feature related paintings. Perhaps lining them all up on the same wall will give us fresh insights.

The peeping-through-fingers is based on a proverb equivalent to the English ‘turn a blind eye’ or ‘look the other way’.  Cavalli-Björkman suggests it could mean to ‘avoid seeing things as they are, particularly if they are unpleasant’.  She mentions a saying alluded to in Pieter Bruegel’s painting The Flemish Proverbs:

Craig, Kenneth, ‘Proverb’s Progress: a Fool Looking Through His Fingers’, in The Great Emporium, The Low countries as a Cultural Crossroad in the Renaissance and the Eighteenth Century (Amsterdam 1992), pp. 105-36.