Large head of a jester 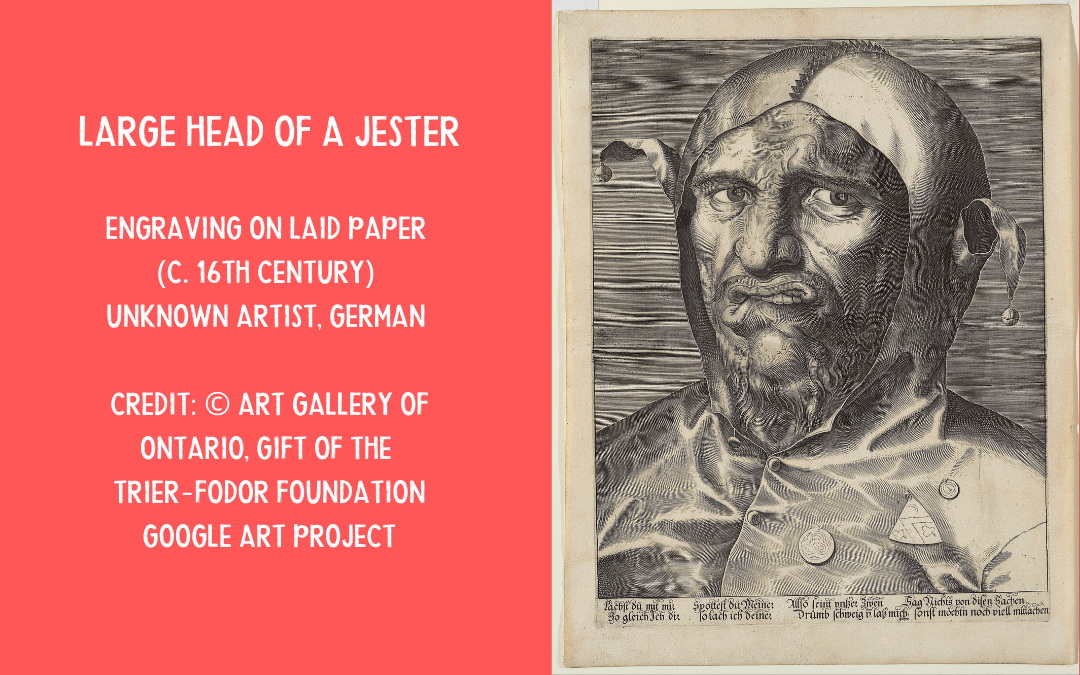 This intriguing German engraving (c. 1600) features a Large Head of a Jester and an inscription beneath.  Wearing a traditional jester’s cap complete with coxcomb and bells, and various badges, it stands out for both the curious lip-biting stance and the enigmatic expression which could convey concern or disdain.  The grimace is unusual among fool depictions and a research paper (Davies & Stewart, 2002) asks pertinent questions about what it might mean, while also providing the text and translation of its inscription:

If you laugh with me

Then I resemble you

If you mock mine

Then I laugh at yours

So are our seven [fools]

So be silent and leave me in peace

Say nothing about these things

Else many will want to laugh with us 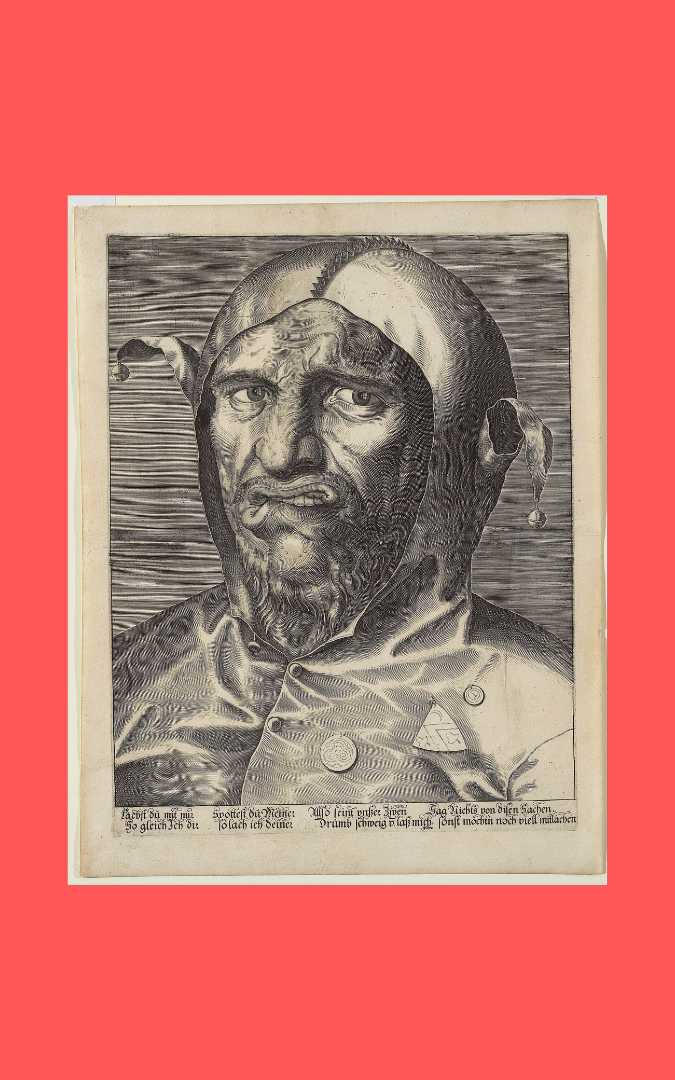 ‘Biting your lip’ can mean to keep quiet and the inscription asks us to ‘be silent and leave me in peace’.  The fool is also an odd mix of kempt and unkempt, having a neatly trimmed moustache and eyebrows and a rough looking beard.

The print falls into a class of European medieval and Renaissance depictions in which a specific number of fools (or other people with animals or symbols) is given which exceeds the number shown on the image.  The suggestion may be that the viewer completes the number.  In this engraving, the text underneath mentions seven, which along with two or three, is a commonly featured number of these one-more-than-shown device.  Interestingly, this particular image doesn’t feature any other jesters, so there is a compound contradiction concerning that mysterious ‘seven’.  Davies and Stewart moot the possibility that the solution lies in the six warts or bumps featured on the fool’s nose, and again on his chin.

They also give other examples of this type, to which I would add the stone carving in the Town Hall of Nördlingen in Germany, known as a Narrenspiegel, a stone-carved ‘fool mirror’.   A fool is looking at you, the viewer, and underneath it says ‘Nun sind unser zwey’ (‘Now we are two’), making the fool appear to be but a reflection of you, the foolish viewer.

A similar example of this are-you-the-missing-fool game can be seen in what appears to be a portrait of two historical jesters, Muckle John and Tom Derry, in an early 17th century painting entitled We Three Loggerheads which shows two fools and a wooden marotte; theoretically the marotte may be the third ‘loggerhead’, but then again it could be you, the viewer.  We will feature this splendid double jester portrait in the coming weeks.

The mirror aspect of these you-are-a-fool-too images may also be reflected in the Large Head of a Jester in the sense that his eyes show two windows in the background, with glass being common to both windows and mirrors (‘looking-glasses’).

Narrenspiegel, stone carving of a fool at the Town Hall, Nördlingen, Germany