Zin, Monika – ‘The jester and the vidūṣaka’ 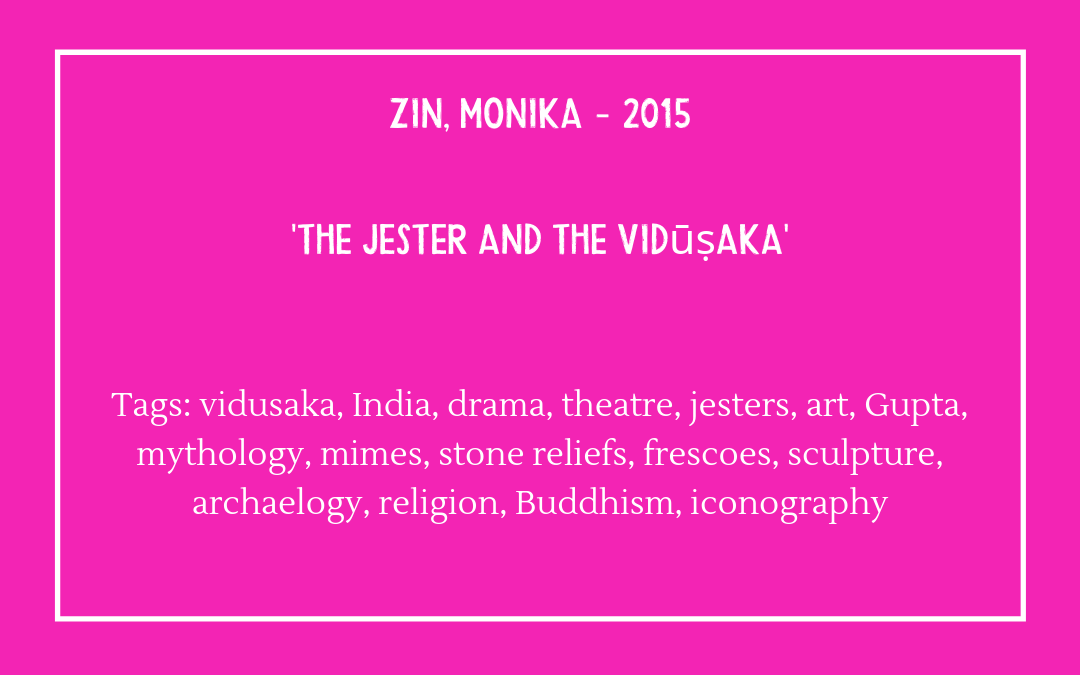 This is an excellent paper both in content and in terms of its contribution to the jester landscape; and how can you not enjoy a paper published in a collection entitled In her right hand she held a silver knife with small bells?

Vidusaka is the stock comic character in classical Sanskrit drama, a Brahmin whose behaviour and appearance are described in the Indian classic of dramaturgy, The Natyasastra, completed some time between 200 BCE and 200 CE.

Monika Zin compares this written description with a wealth of iconographic evidence in the form of stone and terracotta reliefs, sculptures and frescoes, finding a close resemblance between them and the classic of performing arts.  She looks at archaelogical sites and sculptures dating mostly from the 2nd or 3rd to the 5th centuries CE.  These include Ajanta cave paintings and stone reliefs from the 5th century CE; a near contemporary terracotta plaque from the Gupta period (c. 240-590 CE); a sculpture in Bhuvaneshvar from about 300 years later; reliefs at the archaeological site of Nagarjunakonda in Andhra Pradesh dating from around 220-320 CE; and a relief of the Mathura School, from the 1st century CE.

This vivid selection therefore encompasses 500-600 years in different media, and shows a remarkable consistency in the appearance of the Vidusaka, and its resemblance to the Vidusaka outlined in The Natyasastra.  They show the Indian jester-type with clearly recognisable features over a significant stretch of time, and often presented with a quirky humour and warmth.

Some of the photos reproduced in the paper are helpfully clarified by the author’s own line drawings.  No doubt for publication cost reasons, the plates reproduced were bundled together at the end of the paper; it would have been easier to navigate if they had been printed alongside the detailed descriptions and thoughtful analysis Zin provides.

Which doesn’t detract from this being a great addition, particularly given the relative lack of iconographic evidence of jesters outside Europe. The paper also provides a rich bibliography, giving me a number of leads to follow, including Zin’s own.

GAP MAP: It would be great to see more of such evidence and analysis for regions other than Europe, such as China