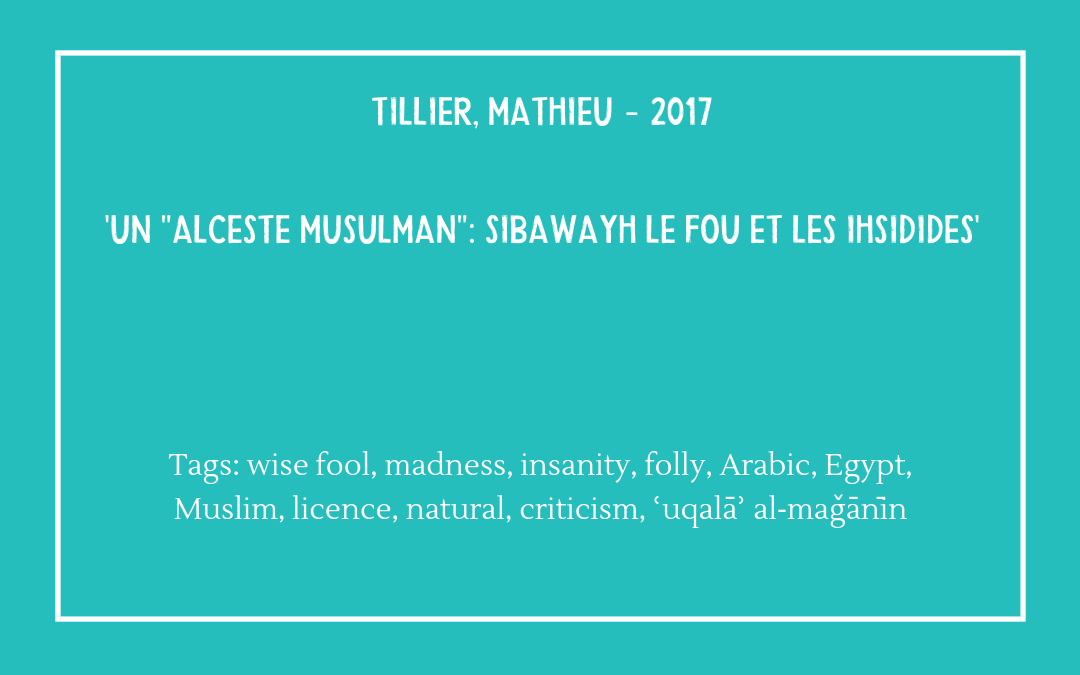 Mathieu Tillier’s paper brings to light the 10th century ‘wise fool’ (ʿuqalāʾal‐maǧānīn) who rode a donkey or walked through the streets of Fusṭāṭ.  Abū Bakr Muḥammad b. Mūsā b. ʿAbd al‐ʿAzīz al‐Kindī al‐ was known as Sībawayh (‘the Egyptian’, to distinguish him from a grammarian of the same sobriquet), and was born 897-898 (284), dying in 968-969 (358).  His exploits were recorded by a contemporary historian who witnessed them first hand,al‐Ḥasan b.Ibrāhīm b. Zūlāq (919‐998/306‐387) (Ibn Zūlāq), and all accounts of him featured here draw on Tillier’s French translations from this Arabic primary source material.

It isn’t clear how Sībawayh became insane, though one account has it being due to a childhood accident when he fell into a well. He was highly articulate and known for his erudition – this is someone whose insanity manifested itself in an untrammelled and fearless urge to inveigh against impiety and immorality, in particular among the elite and powerful, without apparently any concern or consideration of possible consequences.

As such, he was popular among ordinary people who gathered to hear his barbs and critiques, even when some of his attacks would have ordinarily been offensive to them.  On the other hand, he was apparently feared by the elites, many of whom would try to avoid crossing his path as they traversed the city.  They also placated him with favours and pensions, to avoid or rein in his harangues.

Tillier moots the possibility that Sībawayh’s excoriations were tolerated by the ruling classes to allow popular discontent to be voiced and thereby safely discharged, on the grounds that it was ‘only’ a fool speaking.  That seems compelling, even though individually they often tried to avoid being the target of his fierce attacks, either by evading him where possible or by trying to win his (relative) silence by granting him favours.  That said, although he demanded and accepted much that was given him it doesn’t seem to have been a guarantee of his good offices.  He really seems to have been a free agent.

Sībawayh fits the mould of fools given the freedom to castigate those in power due to apparently genuine madness. Tillier’s paper is valuable in bringing to the attention of a non-Arabic reading public, a historical example of the ‘natural’ or ‘wise fool’, whose licence to criticize the elite mercilessly stems from the protection of being ‘just’ a fool.