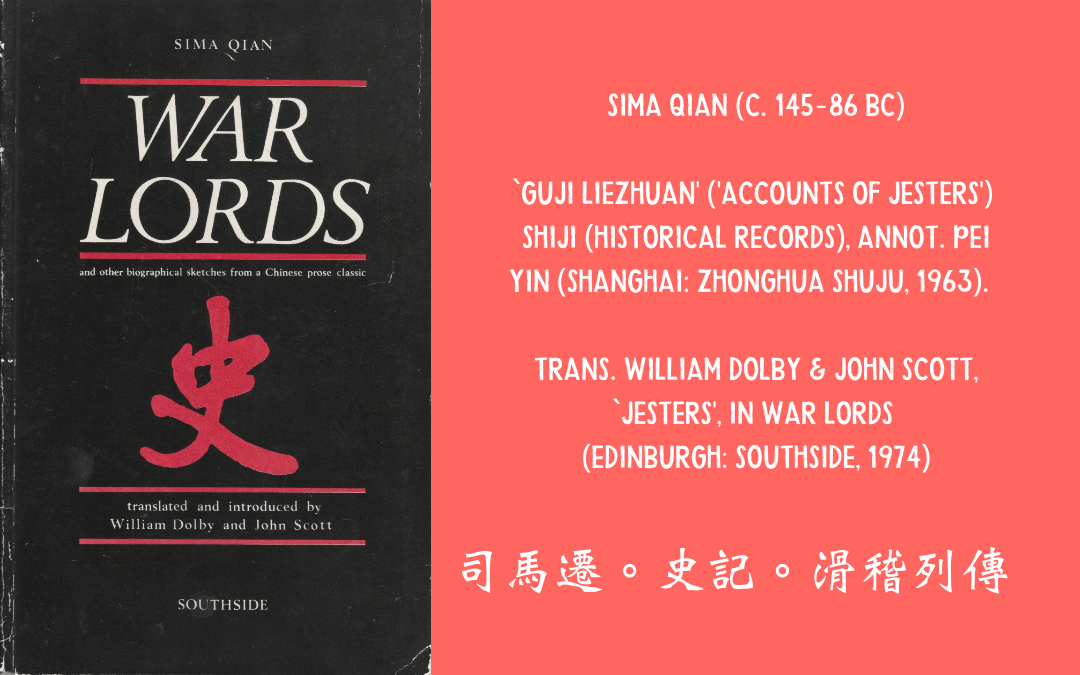 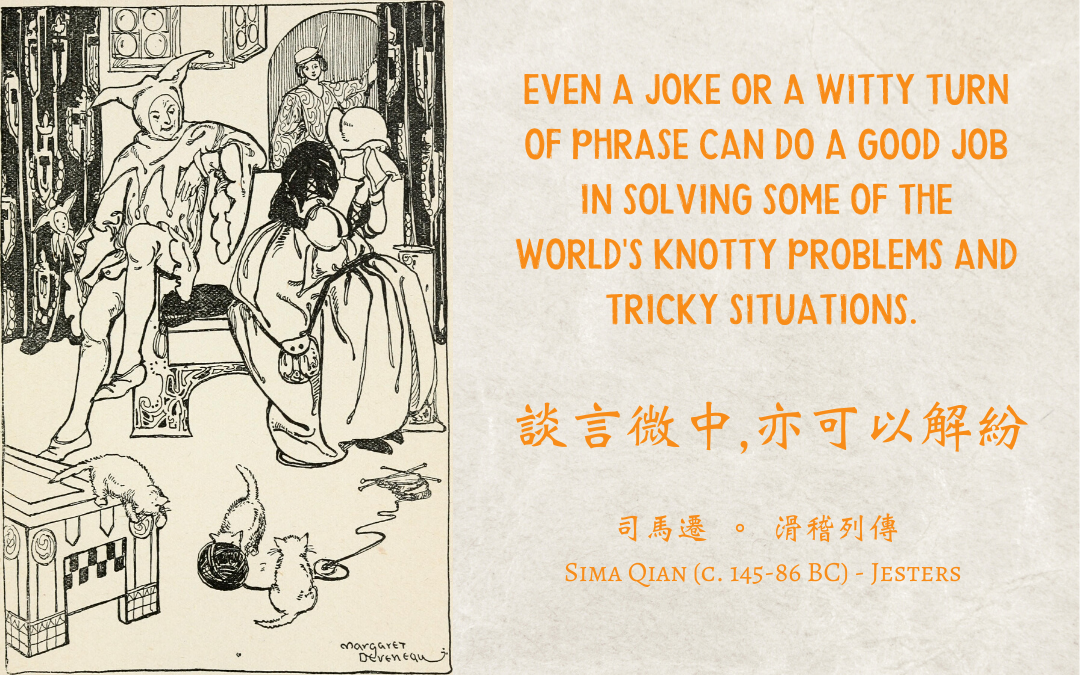 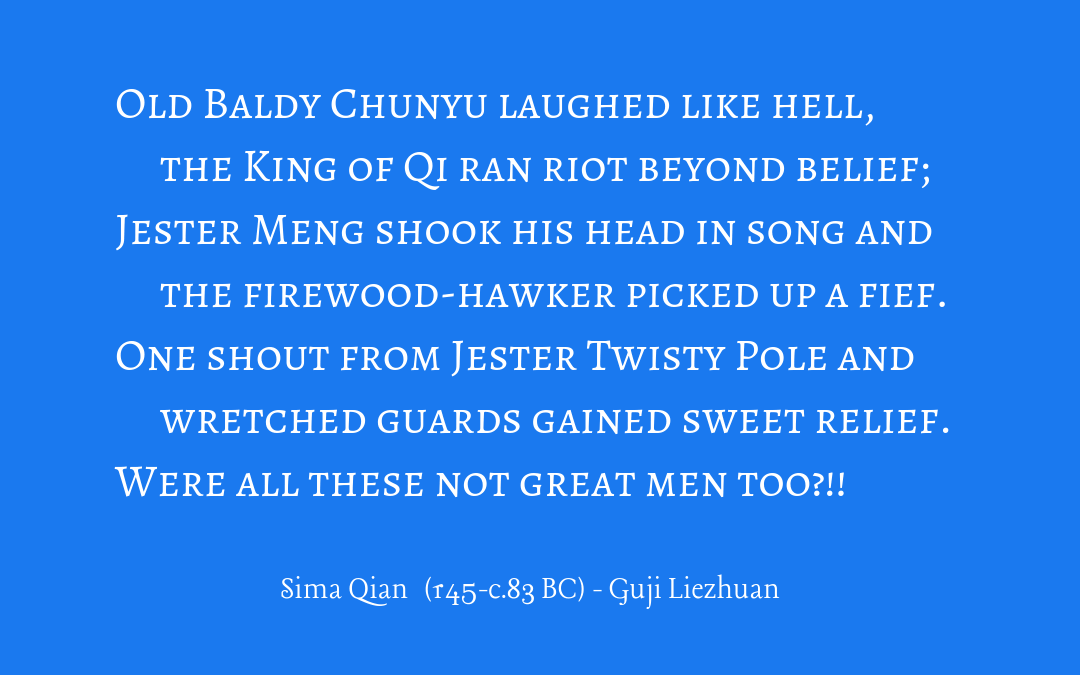 There are a hundred ways to kick off a canon*, and one on fools and jesters could trigger as much argument about what should be included as any other body of essential works on a given topic.  One advantage of slow-mo online accretion is that it is never final and so the discussion can be limited to what you have included and why, rather than what you have excluded, since what is excluded may simply be pipeline-pending.

After too much midnight mulling, I decided to start with the ‘Accounts of Jesters’ 滑稽列傳 in the Shiji 史記 (Historical Records or Records of the Historian), by Sima Qian 司馬遷 (c. 145-86 BC).  While this may not be the earliest reference to court fools and jesters, it appears to be the first study by a historian.

This, and the fact that it is the starting point for any work on Chinese jesters, made it jump ahead of the other books jostling to be listed here.  His work, and the jesters he describes, have a resonance among Chinese people that echoes Lear’s Fool among Westerners – the first they can name and the instinctive reference point for the role of fools.  In describing my work to Chinese people, there doesn’t seem as ready and vivid a term in modern Chinese as ‘court jester’ in English (or similar terms in other Western languages).  But mention Sima Qian’s ‘Accounts of Jesters’ or some of those he names in it, and they have the same ‘aha’ of recognition.

Another reason for beginning with Sima Qian is that foolsareeverywhere.com, like the book which informs it, aims to redress an imbalance within and outside Europe. I believe the Western perception of court jesters tends to be Eurocentric, not out of prejudice, but from a lack of exposure (and access) to materials on non-European fools. Starting with a major work of Chinese history may help shift this perception from the outset. 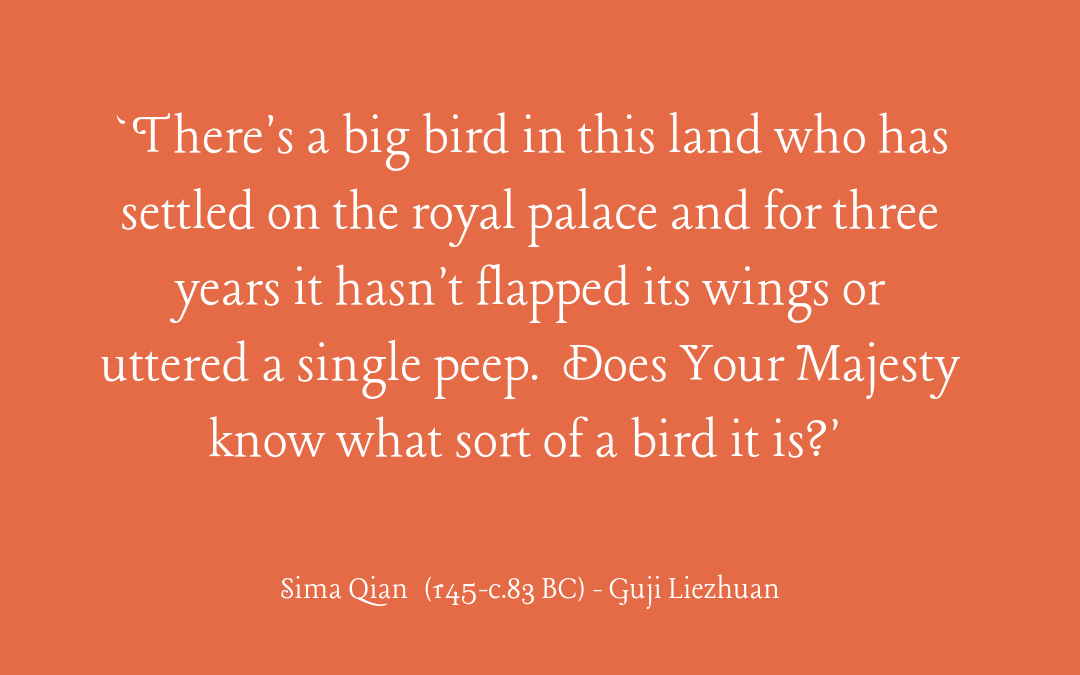 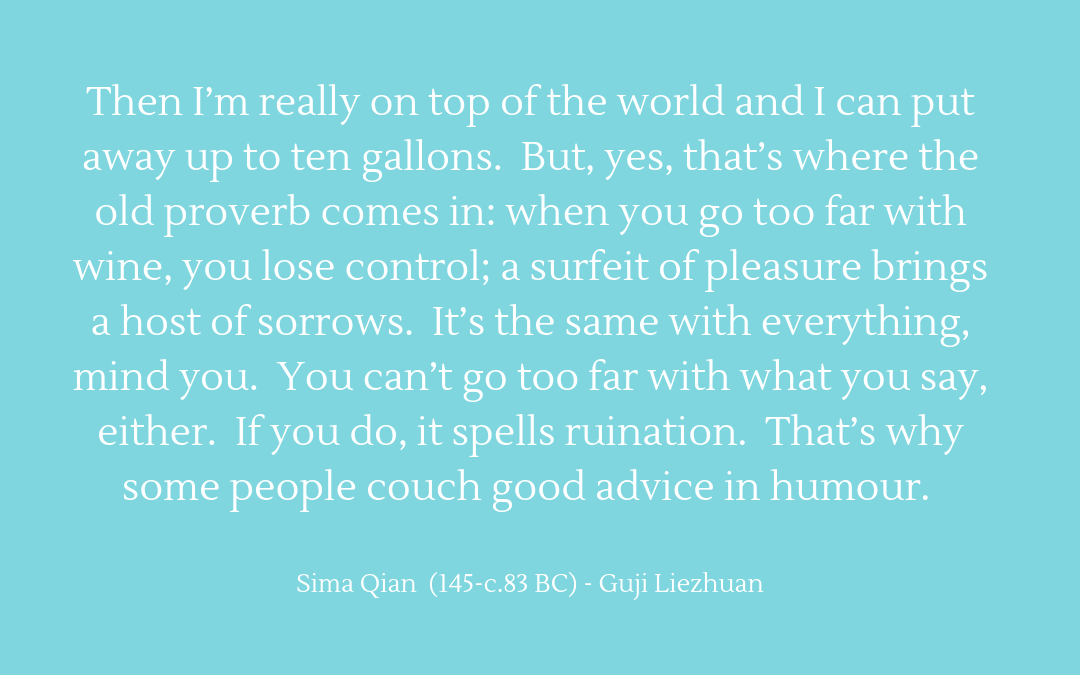 Sima Qian isn’t well known in the West and is commonly portrayed as a Chinese equivalent to Herodotus (484-424 BC).  Like Herodotus he aimed to write an all-embracing world history (albeit the world of China), and he was innovative in his approach. His Historical Records set the tone for the many standard dynastic histories to follow, although his work covered a multi-dynastic sweep of some a few thousand years from the Yellow Emperor to 95 BC and:

… was to set the form for a new way of writing history that came to be known as jizhuanti (‘annals-biography’ after its two most important parts … The two main innovations of Sima Qian were the monographs (shu) and the memoirs (liezhuan).[1]

Sima Qian also shares with Herodotus a certain human immediacy and liveliness of style, summed up by his best translators in English:

Sima Qian was no mere tabulator of soulless statistics, no mere scavenger of faceless trends and movements. Instead he emphasised the realities and human drama of history.[2]

His own words convey something of the breath and depth of his project:

It was my desire to go thoroughly into universal natural and human relationships, to reach a deep understanding of the great crises and decisive upheavals of ancient and modern times, and to formulate all these things into one whole work according to one consistent philosophical approach.[3]

Most significant, for our purposes, is that he saw fit to dedicate one section of ‘memoirs’ to jesters, providing a store of engaging accounts of some superstar jesters and their candid interactions with the ruler.  In giving them ‘air time’, he may have helped make them a legitimate subject for later historians to include in their purview, perhaps contributing to the richness of jester records in the Chinese context.

In the coming weeks and months, we will feature some of Sima Qian’s accounts of fools. Among a number of translations, the sparkiest one is by Dolby and Scott in their War Lords selection; this and others are referenced below.

Jester Meng shook his head in song and the firewood-hawker picked up a fief.

Were all these not great men too?!! 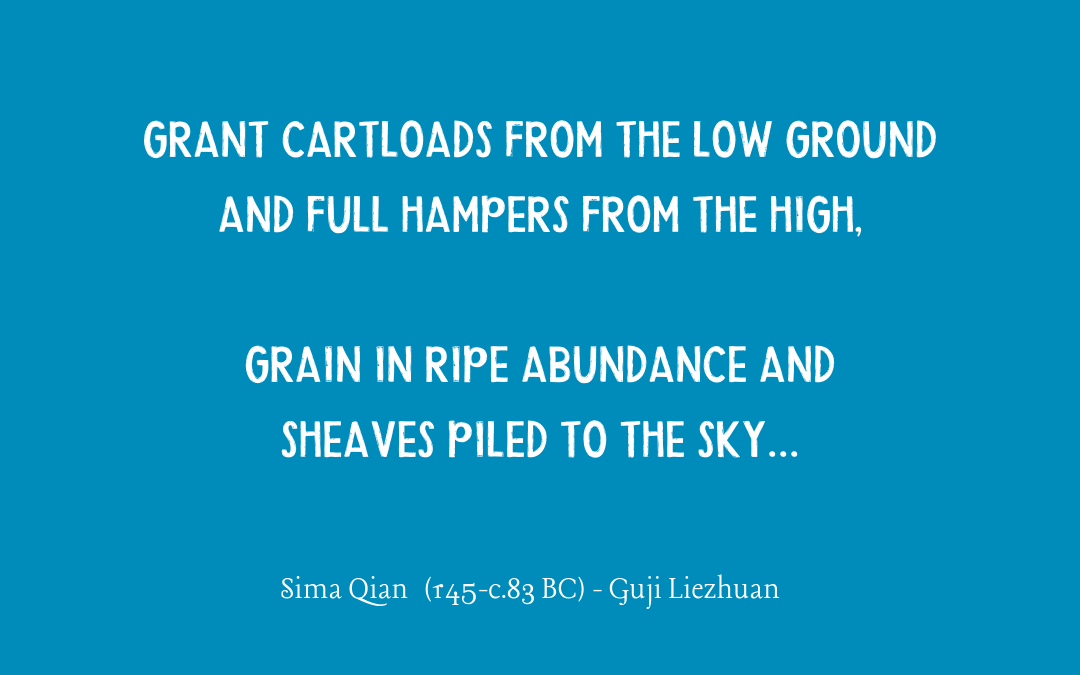 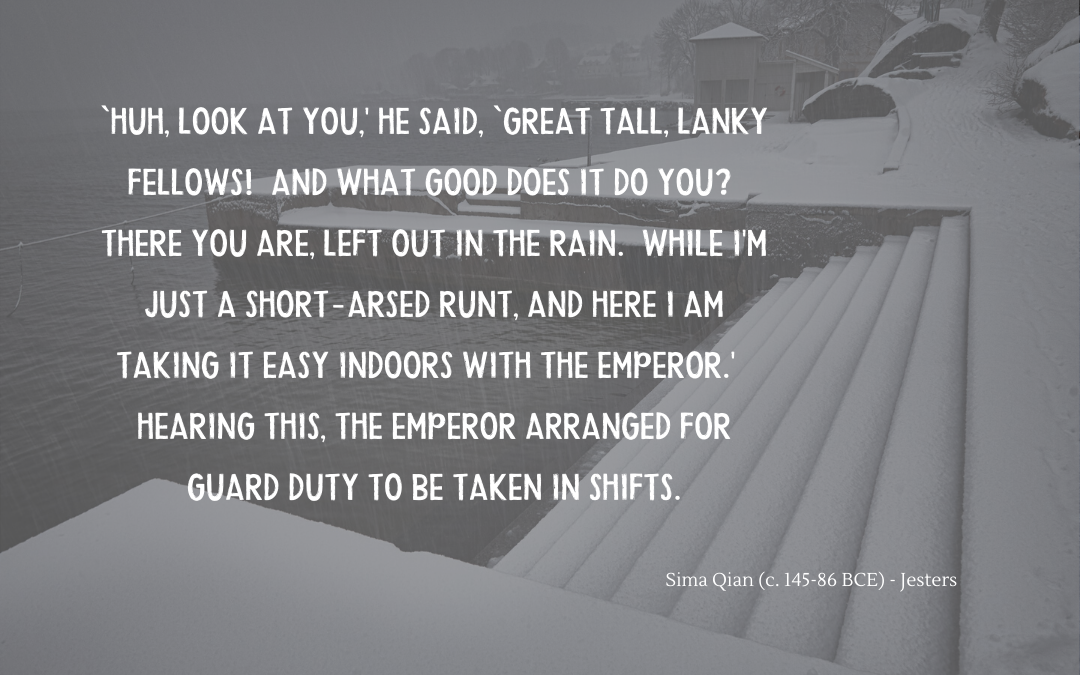 *  For readers uncomfortable with calling a body of selected literature a ‘canon’, feel free to consider it as a working list of strongly recommended reading.

The Chinese text is also available online through the Chinese Text Project, which has an interactive dictionary, meaning you can save hours when you’ve forgotten the pronunciation of that obscure character on line 256.

Sima Qian (c. 145-86 BC), `Jesters’, in War Lords, trans. by William Dolby and John Scott (Edinburgh: Southside, 1974), pp. 157-68.  This remains the most engaging and spirited translation I have come across – read it to get a feel for the jesters and how Sima Qian wrote about them.  However, it deals primarily with Chunyu Kun, You Meng and You Zhan, leaving out some of the others.