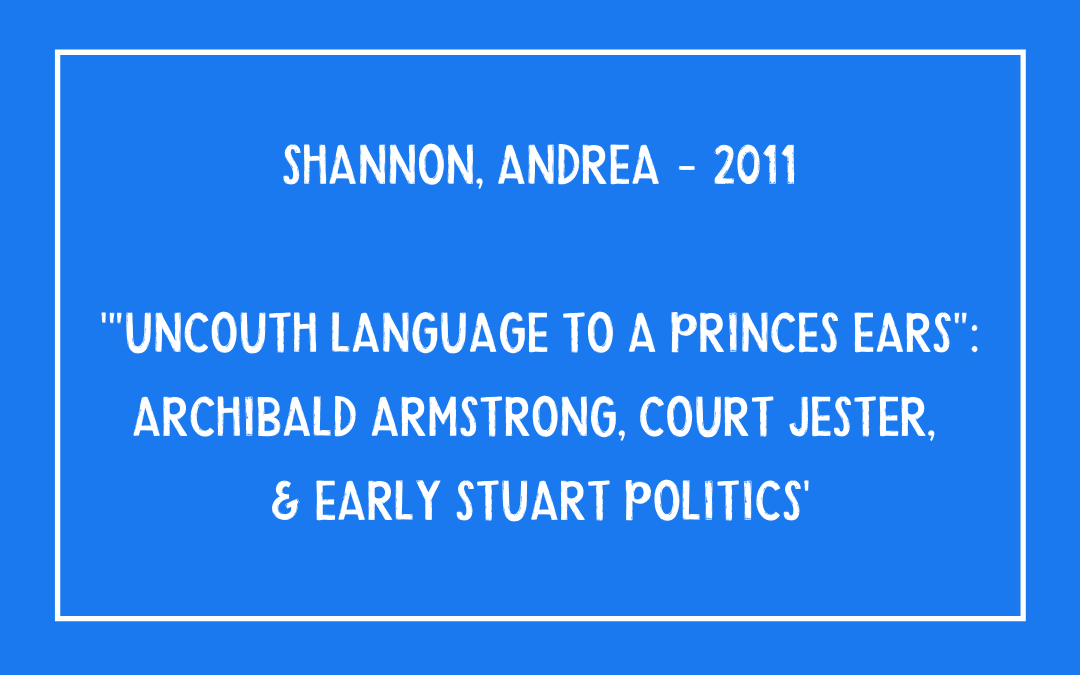 Archibald (‘Archy’) Armstrong was the brazenly outspoken court jester of both James VI of Scotland / I of England (r. 1567/1603-1625) and his successor, Charles I (r. 1625-49).  He enjoyed various privileges, such as the freedom of the city of Aberdeen and a patent for making tobacco pipes.  He was also sent on a quasi-diplomatic mission when Charles, then Prince of Wales, went to Spain to negotiate his marriage to the Spanish Infanta.  The negotiations failed, but Archy seems to have made himself popular with the Spanish court, and asked James to provide him with an interpreter, assuring him he could find out more of what was going on than any other member of the delegation.

Andrea Shannon’s excellent paper looks at Archy’s forthrightness, or his ‘uncouth language to a prince’s ear’, in the political context of the time, including the widespread knowledge beyond the court of his career as court fool, which she examines as evidence of the degree to which state issues were known and discussed.  His eventual banishment is also considered in relation to the ‘fluid boundaries of acceptable criticism’.   Or in Archy’s case, unacceptable.  I would add, given the strength of feeling about such affairs, including those of a religious nature, it is also surprising how much Archy got away with, and for how long, underlining perhaps the licence of the fool.

That said, an occupational hazard of the fool is that sooner or later they may overstep the mark in their mockery or criticism.  They were often fearlessly frank with people in positions of considerable power and Archy crossed that line in 1638 when he made fun of the Archbishop of Canterbury, Laud, with whom he’d had other altercations.  The king and the Archbishop wanted to impose a certain uniformity in religious practice and insisted that the Scots use the Book of Common Prayer.  The strong opposition and even rebellion arising from this led Archy to ask Laud, ‘Who’s the fool now?’.

He was summoned before the Privy Council, in the presence of the king, and both fired as court fool and banished from court.  Later apparently resorting to the social media of the time, a pamphlet appeared in 1641 ostensibly written by Archy, with the comprehensive title of Archy’s Dream, Sometimes Iester to his Maiestie, but exiled the Court by Canterburies malice: With a Relation for Whom an Odde Chaire Stood Voide in Hell.  This mocked Laud’s downfall and used ditties to suggest that the fool had ended up in a better position than the Archbishop.