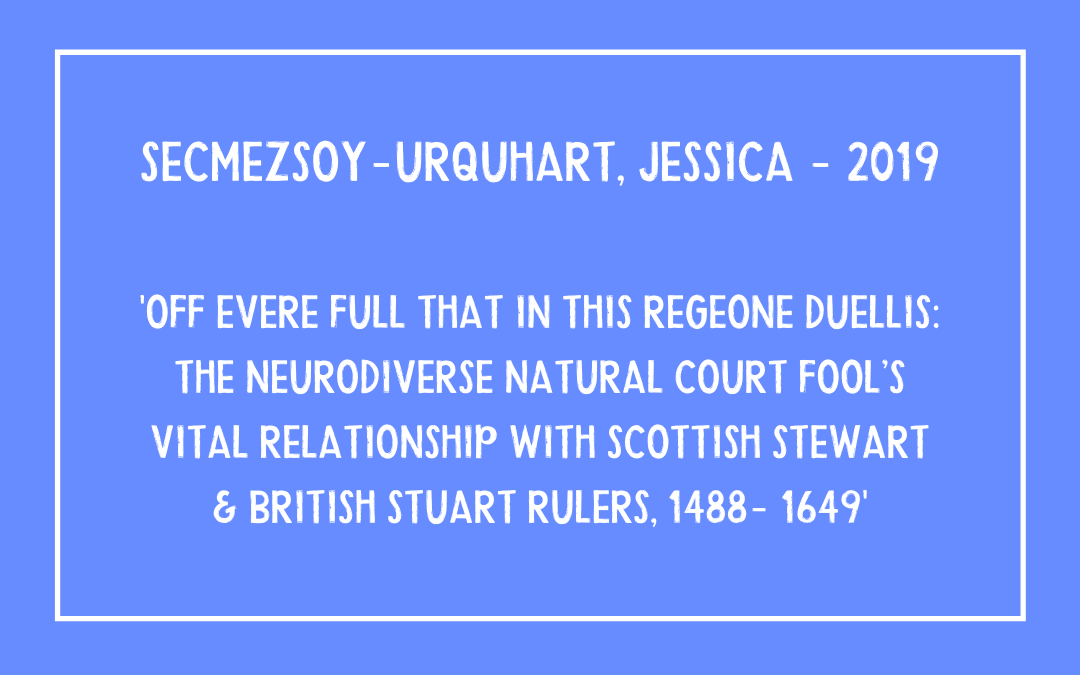 This thesis makes a strong contribution to our understanding of several aspects of the fool, building on earlier work by Jessica Secmezsoy-Urquhart and covering the period 1488-1649.

Geographically, it zooms in on the Stuart (Stewart) court’s relationship with fools, with a particular emphasis on the Scottish court before the Stuarts decamped to London on James VI’s accession to the English throne in 1603. On this front, it gives a more nuanced view of the many natural fools who had an intimate place in the royal Scottish household, while deepening our knowledge of a number of named fools.

In addition, Secmezsoy-Urquhart takes a fresh look at the role and treatment of the natural fool, also using the term ‘neurodiverse’ which has emerged from the growing field of disability studies.  She demonstrates the extent to which attitudes to neurodiversity were fluid and complex, and arguably more respectful and tolerant of mental difference than from the 17th century onwards.  The Stuart court in Scotland shared the attitudes of many other European courts to the natural fool: on the one hand as someone to be cared for even while being laughed at, and on the other, as someone to be wondered at, whose truth-telling and innocent wisdom or candour were to be respected and heeded.

She traces the context and evolution of the natural fool’s position in the court to its high tide in the 16th century, before it began to fade in the early 17th century.  By this time, the Stuarts, particularly with Charles I, were moving in favour of the artificial fool, of whom Archy Armstrong is the outstanding example.  By the time of Charles II natural fools were out of favour, although we know from Pepys that the actor-impresario Tom Killigrew had the artificial fool’s privilege of speaking out candidly.

The thesis underlines the truth-telling aspect of the fool, revealing that the Scottish court included for a time a culture which encouraged a particularly healthy degree of criticism and mockery.  Secmezsoy-Urquhart draws attention to examples of ‘mirroring’, in which fools would use imitation or mockery to hold a corrective mirror up to current events or personalities in the court. This struck me as consistent with the role of the fool elsewhere, and in this I would gently question Secmezsoy-Urquhart’s suggestion that this was unique to the Scottish fool.  As an example, Chinese jesters quite regularly put on skits which reflected back to the emperor what was really going on, whether it was through the imitation of a minister, the acting out of some current issue in a way that could trigger reform, or calling the emperor himself to account for his nepotism, negligence, cruelty, stupidity or other failing.

A third welcome aspect of the thesis is the mining of Scottish court accounts. In Europe, royal household accounts are one of the richest primary sources of information on fools and related people in the court, such as dwarfs, and as far as this work has been done, they repeatedly show that fools (and dwarfs) were often cared for over long periods of time, whether through allocations of money, material (such as cloth or clothing) or the provision of keepers for natural fools (what we would now consider carers).  This includes the provision of care, pensions or bequests even after the fool’s master or mistress died or fell from favour or power.

These treasury records tend to suggest that the informal status of fools (and of dwarfs or others with physical or mental differences) may often have been higher than previously believed and their treatment more solicitous.  Such records further allow us to know of or to corroborate the existence of specific fools, particularly where their names turn up in jest-books or plays in which historicity can morph into embellishment.  Finally, they give us real insights into the clothing of fools for whom the commonly expected ‘uniform’ of cap and bells appears to have been more emblematic than real. While bright and mixed colours appear, it isn’t clear that the cap and bells or related devices were worn by real fools.

Fools Are Everywhere looked at English, French and Spanish court accounts and a few examples from Italian courts, but this remains a treasure trove to be delved into on a much larger scale.  Secmezsoy-Urquhart has turned up a welcome range of materials in the Scottish accounts, and herself mentions that more work is needed to complete this.

Secmezsoy-Urquhart places the decline of the natural fool in the Stuart court in the broader context of changing attitudes to neurodiversity, attitudes which with the Enlightenment’s focus on reason became less fluid, less sympathetic and more dismissive.  This is one of the strong underlying currents influencing the overall decline of the fool in European courts, until by the 18th century they might still appear in this or that noble’s household, but had lost their place and privilege at the centres of power.

I look forward to seeing where Jessica goes next with her work, it’s bound to be fruitful.

The thesis is available at Academia.  Earlier work by Jessica includes:

Secmezsoy-Urquhart, Jessica, ‘To what extent can Disabled Theory and History make sense of eunuchs and create new perspectives of their 15th-18th century Ottoman roles’, working paper, 2018.