Rumor, Maddalena – ‘There’s No Fool Like An Old Fool’ 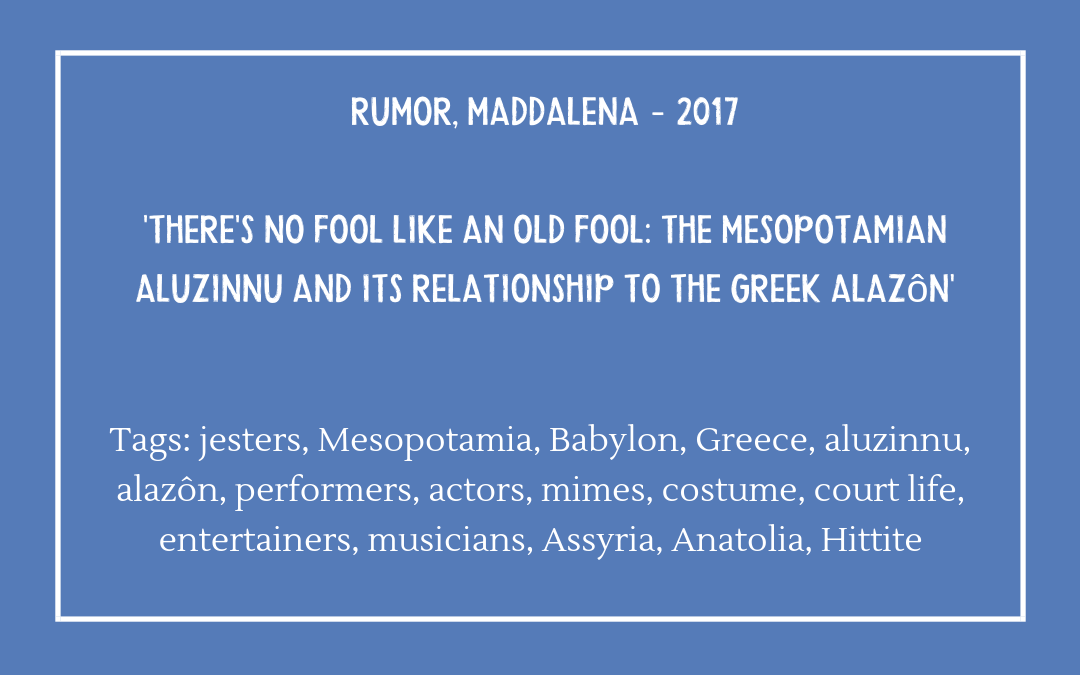 ‘When did professional jesters become  a part of civilized society, and in particular a part of court and temple personnel?’ (p. 187)

Maddalena Rumor’s paper poses a big question and moots the possibility of an early start to the jester as a recognisable profession in Mesopotamia, close in time to the earliest reference I have found so far: a possible jester in Egypt during the Sixth Dynasty (2323-2150 BCE).

Rumor unpicks the etymology of the aluzinnu through lexical lists and other primary sources. It seems to have been used over a long stretch of time, sometimes apparently meaning what we might recognize as ‘jester’ and in other times and places taking on different or additional shades of meaning. This isn’t surprising given the time scale it covered; similarly, the Chinese classical terms for ‘jester’ in some cases imply a musical element, or later came to mean ‘actor’.

Rumor explores the possible origins of the word, including late Babylonian commentaries and lexical lists featuring related words next to aluzinnu, such as musihhu (‘clown’ or ‘he who brings to laugh’); it is also parked alongside words for cultic dancers, actors, clown, braggarts, and some scatological references. It is interesting that other scholars have translated the term into words which are either directly jesterish, or related, such as Spassmacher, trickster, amuseur, clown, jester.

There is a Mesopotamian humorous composition, where the alazinnu is the protagonist in a ‘collection of playful episodes that mock various experts and literary genres’, echoing the jester’s frequent irreverent deflation of puffed up scholars and literati.

Rumor also explores a possible link to the Greek alazon, although it seems quite tenuous apart from some shared aspects of the braggart.  The aluzinnu seems to have had a touch of this, with one text asking him ‘Oh aluzinnu, what can you do?’ to which he responds with comic boasting about each profession. But in contrast, the Greek alazon appears to be more of a type than a profession.

Is the aluzinnu a jester, or proof that they existed in Mesopotamia?  Rumor does describe him so and shares references to him which would certainly fit the bill. Can we proclaim that the jester was alive and kicking in Mesopotamia in the first and second millennia BCE?  Not quite. But Rumor makes a compelling case that he might have been, and I would use aluzinnu as a key search term in hunting for him.

See also the alazinnu entry in the lexicon.