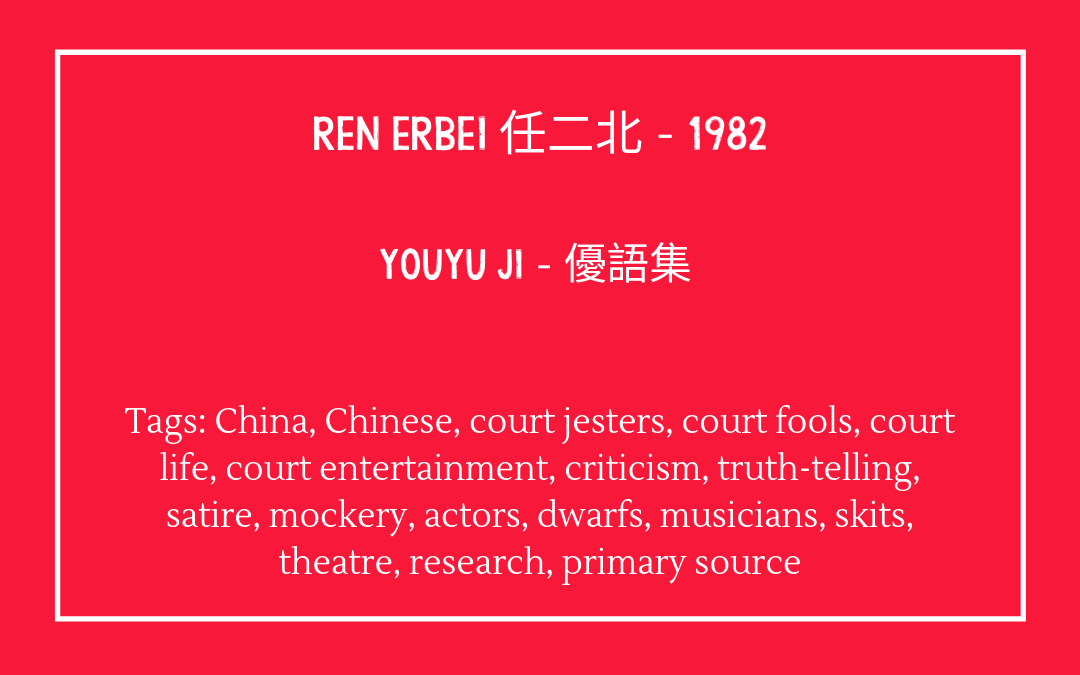 For any serious study of Chinese jesters, this is the ‘Bible’, bringing together practically the full spectrum of primary source accounts of jester doings and sayings stretching over a few millennia. Quoting well over 400 stories, skits and anecdotes from histories, miscellanies and other sources, this is the place to run your hands through the vast treasures of classical Chinese materials on fools and jesters.

Organised chronologically, it begins with the Zhou dynasty (1046-256 BCE) and continues into the early 20th century Republican era with actors taking on something of the jester’s mantle.

This was the springboard for the Chinese elements in Fools Are Everywhere, and many of the stories it features have been translated there and elsewhere, and will be fed through foolsareeverywhere.com in the coming months and no doubt years. We will also be revisiting some stories we read but didn’t include in the book.

In addition to the primary texts, the book has a wealth of commentary and analysis, including Ren Erbei’s own foreword, and prefaces by Long Hui 龍晦, Zhao Jingshen 趙景深(1902-85), a popular Chinese novelist, and Hou Baolin 侯寶林 (1917-93), one of China’s best loved performers of the improvised comic dialogue known as xiangsheng 相聲.

Since court jesters in China were arguably a precursor of Chinese drama, sometimes creating short skits in order to get a point across to the Emperor, the book should be of great interest to students of Chinese theatre. It also belongs on the reading list of any study of Chinese humour, given the extent to which jesters used humour to couch their indirect advice.