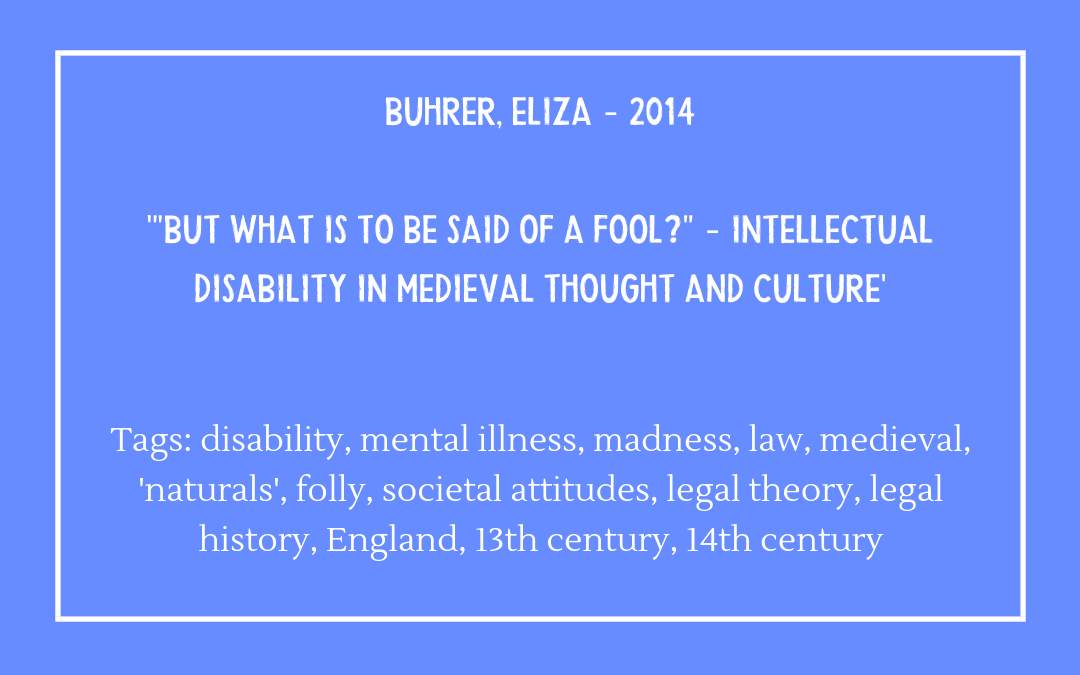 A clear account of attitudes and beliefs in medieval England regarding mental disability and illness, Buhrer’s paper highlights distinctions between temporary and congenital madness or mental impairment, as it was considered in society and by the courts.  The latter had a strong bearing on whether someone was considered mentally fit to run their own affairs, or whether their property and its running would be better taken over by relatives or by the Crown.

Buhrer moots convincingly the possibility that attitudes to mental disability were directly shaped by evolving legal theory and practice – rather than the other way around:

‘I would like to suggest that the modern concept of intellectual disability did not arise from physicians’ inquiries into the workings of the brain, or philosophers’ questions about the nature of rationality.  Instead, its origins can be found in a meeting of legal theory and practice during the late thirteenth and fourteenth centuries.’ (p. 334)

‘People first began to see intellectual impairment as a permanent, congenital disorder primarily because new laws compelled them to.’ (p. 343)

Additional quotations will appear in posts in the coming weeks.

GAP MAP: It would be interesting to see if there are parallels in other legal systems of the time, such as France

Source: Buhrer, Eliza, ‘”But what is to be said of a fool?” Intellectual disability in medieval thought and culture’, in Mental and Physical Health in the Middle Ages and Early Modern Period, Fundamentals of Medieval and Early Modern Culture, Albrecht Classen (ed.) (Berlin & New York: Walter de Gruyter, 2014), pp. 314-43