Pamela Allen Brown – The Mirror and the Cage 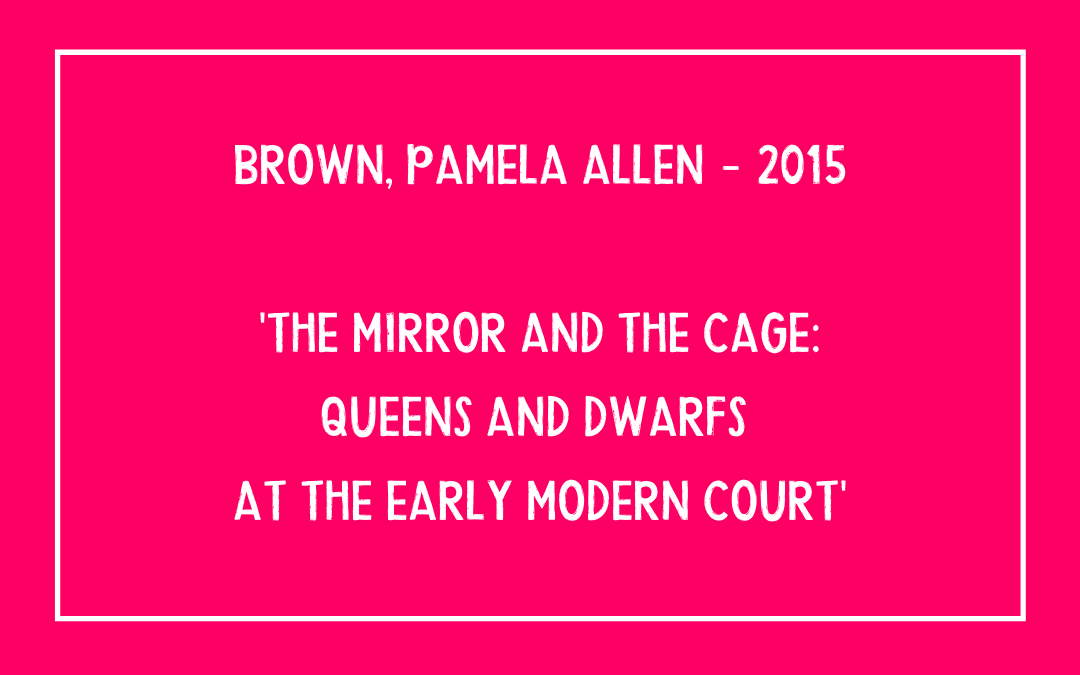 During a few hundred years the European aristocracy had something of a mania for dwarfs, ‘natural’ fools, and other humans of physical or mental difference or disability. Their relationships with these people of more humble backgrounds can be complex, touching or simply troubling to modern sensibilities.

On the one hand, dwarfs or ‘natural’ fools could be laughed at or treated with cruelty, they could be loaned or given to one’s peers as a high status gift, or otherwise treated as living goods. Pamela Allen Brown mentions ‘trafficking’ and this feels realistic, even when they may not have been violently compelled. Compulsion can arise from a paucity of options.

On the other hand, they could and frequently did find protection, affection, trust and tenderness, in what sometimes became long-standing close relationships with their elite mistresses and masters.  They and their relatives could be cared for, with pensions, bequests or guardians being provided if needed.  They could enjoy ready access and a certain freedom of speech and behaviour.

Brown highlights some of these nuances, and examines the connections and in some senses similarities between powerful female nobles and the dwarfs they had around them, including those they might give away.  She opens with a discomfiting account of the Spanish Infanta, Isabella Clara Eugenia, bringing with her a polyglot parrot-parroting female dwarf, who is revealed as a gift to Isabella’s grandmother Catherine de Medici with the flourish of a cloth being removed from her cage.  To the delight of all and a diplomatic score for Isabella.

Brown mentions another example of this kind of abject objectification in which Isabella d’Este proudly makes a gift of the two-year old daughter of her own dwarf (probably Delia) without any sign of needing the mother’s permission.  While wondering at the maternal grief which may be hidden from view, I ended up thinking about the limited freedom a woman of even Isabella’s status would have had over her own body.  No matter how powerful, women were subject to strong marital and reproductive expectations, in which the deployment of their bodies was a matter of family or other political calculation.  They too could have seen children taken away from them if they or someone else felt it was for the good of all concerned.

The dwarf who accompanied Isabella Clara Eugenia was in some senses a human ‘performing seal’, but she may have considered herself secure in the protection of first one and then another royal mistress, and so have seen value in ‘playing the game’.  Similarly, the dwarf mother of the girl Isabella d’Este gave away may have considered this was the best she could do for her daughter.  Brown prompts us to be wary of attributing a passive lack of agency to people who may have understood the rules and turned them to their own advantage.

Her paper also draws valuable parallels between the objectification of dwarfs’ physiques and something equivalent in the queens they served.  Elizabeth I, whose possible marriage or non-marriage were matters of high state and low gossip, was subject to comments about her ability to have sex or children, including intimate references to the functioning of her reproductive system.  Her body, in other words, was in the public domain, even when she skilfully managed public relations through the portrayal of an adorned, perfect, ageless, virginal physique.  Perhaps she found some refuge from this image pressure in the close circle of women around her, including the dwarf Thomasina (Madame Thomasin), who would have seen her in her real state.

Similarly, Isabella Clara Eugenia is mirrored in the ‘performing seal’ aspect of her accompanying dwarf, as Brown eloquently puts it:

Queen and dwarf are worlds apart yet uncannily mirror each other. Both arrive as strangers to foreign courts, where they are placed on show and must speak languages not their own. Both possess valuable bodies that function transnationally in courtly networks of exchange. Both are hyper-visible, vulnerable to the multiple gazes of a critical courtly audience.  p. 137